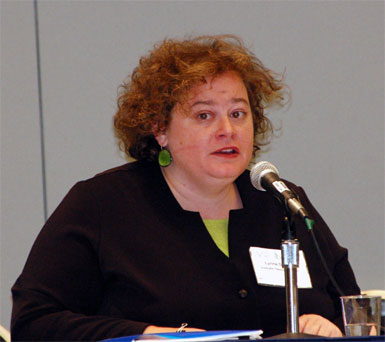 The Bush administration's appointment of a fundamentalist nutjob doctor to oversee federal programs dealing with teen pregnancy and family planning underscores the importance of a panel yesterday at the American Academy of Religion conference on "Evangelical Initiatives/Women's Bodies." Moderated by Katherine Ragsdale, an Episcopal priest and director of the think tank, Political Research Associates, the panelists described how an array of programs initiated to assist and empower women have been warped by our current rulers to enforce their notions of morality on women, world wide.

Lucinda Peach of American University calls this drive for dominance "Globalizing 'the Word.'" Her paper illuminated how U.S. programs to reduce the trafficking of women for sexual slavery have been turned over to "faith-based organizations" that have made the work into a war on prostitution and then a war on the women caught up in prostitution. Because of U.S. prohibitions on foreign grantees working with organizations of sex workers themselves, HIV education and retraining programs have been undercut. Further, dramatic "rescues" of women trapped in trafficking too often lead to sending them back to the families and social circumstances that led to their being sold in the first place -- to places where they are shunned and starved or even sold again into prostitution. In Peach's description, "faith-based" anti-trafficking impressed me as "reality-resistant arrogance," however well meaning the individuals involved may be.

Jenna Gray-Hillenbrand of UC Santa Barbara described efforts by evangelical groups like the Family Research Council to prevent school systems from requiring mandatory vaccination of young girls against the HPV virus that is associated with cervical cancer. Scientific research indicates that vaccination before the age of sexual activity could great reduce incidence of these cancers that infect 10,000 U.S. women annually. But our fundamentalists fear that vaccination would teach girls that the bad consequences of pre-marital sex can be prevented with a shot. Better they die apparently, than fuck without a license. Gray-Hillenbrand was careful to say she didn't want to demonize vaccination opponents. I have ask, why not? This is not a courtesy that they will offer you.

Lynne Gerber from the Graduate Theological Union in Berkeley spoke about two evangelical initiatives, so-called "ex-gay" ministries and Christian weight loss groups. Gerber does what most of us don't: she talks with these people. She emphasizes they "genuinely" care about the targets they are seeking to change: gays and fat people. And apparently they frame their efforts in language that sounds to me like very ordinary American psycho-babble: adopting restraint of sexual drives and of consumption of food will yield "health." It turns out the "health" they value is the ability to do God's work as they understand it. Nowhere in this worldview, apparently, is there any sense that God names creation "good" or that God rejects nothing that God has made. This seems a sad, cramped, fearful world to me -- but hey, it isn't mine. And I'm not about to let these people enforce it on everyone. Lots of work to do.
Posted by janinsanfran at 7:06 AM