Muslims organize and turn out to vote 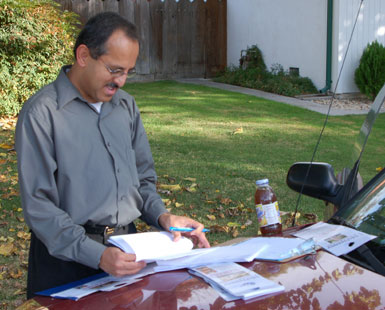 Saifi Raniwala walks his first precinct for Democratic Congressional candidate Jerry McNerney.
When a community is stereotyped and stigmatized by the majority, one way out can be voting and contesting for political influence. Many Muslim-Americans took this route in the 2006 midterms.

For many, the sign of Muslim success is the election to Congress of Democrat Keith Ellison in Minneapolis; Ellison is an African American convert to Islam. Elections researcher Louise Cainkar of the Great Cities Institute at the University of Illinois-Chicago comments on Ellison's win:

"Muslim-Americans are emerging as a voice to be recognized in American society," she said. "I don't think they have power yet. You must first acknowledge you have a right to be part of the discourse. They are working on that now and to some degree they have attained that."

"But there are a lot of people who don't want that voice to emerge," she said, a common theme in American history where Irish, Jews and other newcomers were repeatedly treated with suspicion and discrimination by those already established.

That comparison, though sympathetically intended, actually contains a misconception. Not all U.S. Muslims are newcomers. Though it is estimated that currently 70 percent are foreign born, their religion has been a largely hidden current in this country since the first African slaves were brought here in 1619, some bringing their Muslimm faith with them.

This year "there is a great deal of concern and a strong sense of urgency to come out and vote in large numbers," he said. "We are callously eroding civil liberties and dismembering civil rights," while pursuing a foreign policy that targets Muslim countries, he added.

In addition to civil liberties concerns, polls report that Muslim citizens expressed other views they hoped to carry into the mainstream through participating in the election.

Seven in 10 respondents agreed with the statement, "A just resolution to the Palestinian cause would improve America's standing in the Muslim world;" two-thirds said they were in favor of "working toward normalization of relations with Iran"; and 55 percent agreed with the assertion that "The war on terror has become a war on Islam."

Some seventy percent of Muslim voters said they disagreed (46 percent "strongly disagreed") with the proposition that "The war in Iraq has been worthwhile for America," while only 12 percent said they believed that it was. 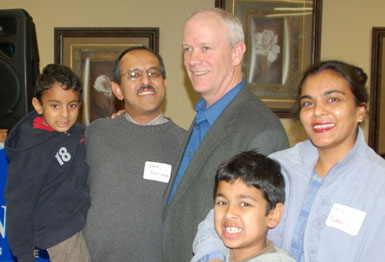 Posted by janinsanfran at 10:59 PM