Dave Zirin, an interesting observer of sports from a left perspective, has done the digging to assemble a catalogue of political donations in the current election from prominent athletes. The piece is not online anywhere I can find, but you can sign up for Zirin's emails (that's where I got this) at Edge of Sports. I'm going to cherrypick some of his findings here, pointing to his football examples: Zirin assembled his data in order to throw disdainful barbs at a corrupt electoral process and the athletes who play in it. I'm more interested in the process that makes high achieving athletes into conservatives. The sports owners are easy to understand -- they are rich, often bullying, old white guys, so they find their natural allies. But many of the best athletes come from poor backgrounds and are people of color; their home communities don't share their enthusiasm for the white, rich, and powerful. So what's up? 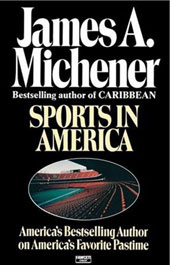 In 1976, James A. Michener published a classic study, Sports in America that is still very much worth picking up, probably from the throwaway section of a used bookstore. It's certainly got many shortcomings, but it is still an interesting, broadly conceived look at our national obsessions. The novelist Michener was a liberal Democrat; in fact he once ran for Congress unsuccessfully from a Republican district in rural Pennsylvania. His speculations about athletes and political ideology still ring true.

Of the sixty [star] athletes I have known, fifty-nine have been Republicans. ...The athlete and his coach move in a world of conservative values and are surrounded by conservative types. Very few Democrats among the alumni have private jets, or good jobs to dispense, or the spare cash to endow athletic scholarships or build press boxes so the university "can go really big time."...

Also coaches know that conservative, hard-nose procedures pay off. ... If I were a coach I'd recruit all my boys from underprivileged Democratic families and convert them to Republican linemen. ...I wouldn't have a single Democrat among my assistant coaches and I'd quickly identify the businessmen in my area who had private jets....[These are] the coaches who remain in coaching....

Since Michener wrote, professional athletes have far more clearly joined the moneyed few. Now they can own the private jets themselves. No wonder they mostly line up with Republicans; for most it would be literally costly to do otherwise.

In this cycle, Heath Shuler, former Tennessee and Washington Redskins quarterback, is running as a Democrat for a North Carolina seat and has a good chance. Meanwhile Lynn Swann, a former Pittsburgh Steeler, is crashing as Republican running for Governor in Pennsylvania. I see no reason to believe that athletes are either more or less qualified than other candidates -- except they may start with more money.

Stuff to think about while we enjoy watching football.
Posted by janinsanfran at 10:57 PM