Hope on the verge of an election 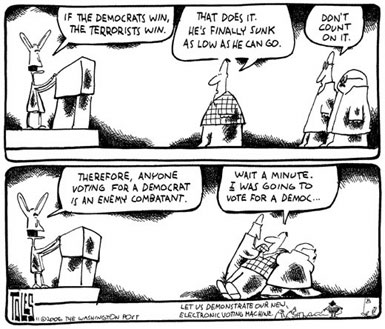 Blogging will be sparse or perhaps non-existent for the next few days. I'm getting out the vote for Jerry McNerney and afterward probably collapsing. It is hard not to be nervous. Republicans are vigorously trying to suppress the independent vote with phony robocalls. Somebody finally figured out a use for the damn things. Ugly.

But concurrently I'm in the middle of a related but different storm that is very heartening. On Friday War Times/Tiempo de Guerras sent out a pre-election offer of free newspapers with this message:

As we approach an election in which Democrats look likely to capture at least one house of Congress, people who seek peace cannot afford to ease up. The election may put new faces in Washington in January, but unless the people of the United States push our representatives to end it, the war in Iraq will grind on.

Over the last three days I have processed over 100 orders and shipped literally thousands of free copies to activists around the country. Apparently we are developing the sophistication to struggle on more fronts than one at the same time. Good -- we are going to have to.
Posted by janinsanfran at 8:04 AM

Good luck getting through the sleep deprivation yourself.