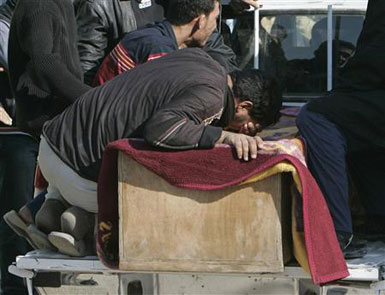 A man cries over the coffin of a relative who was killed during Thursday's bomb attacks in Baghdad's Sadr City November 24, 2006. The death toll in Thursday's Baghdad bombings rose to 202, police said, after more than 40 people died overnight following the worst sectarian attack since U.S. forces invaded Iraq in 2003. REUTERS/Thaier al-Sudani

Yesterday's appalling carnage in Baghdad and today's news of mosques burned in revenge reminded me of the extremely clear description of the onset of Iraq's civil war by Nir Rosen in the current Boston Review. The piece is very long and very dismal, but explains clearly how the U.S. invasion and occupation brought Iraq and the whole region to its current tinderbox condition.

Juan Cole pointed to an AP report quoting the Shia leader Muqtada al-Sadr as urging, in the wake of the car bombs in the Shia suburb, "Be the ones who are unjustly treated and not the ones who treat others unjustly."

If Rosen is to be believed, such calming language is both too late and not seriously meant. Though al-Sadr has called for unity of Iraqis against the occupation, the events of the last few years have left him and his followers convinced that Sunnis have betrayed their overtures. Especially since the destruction of the Al-Askari Mosque in February 2006, Iraqi religious communities have plunged into intercommunal warfare. Some observations from Rosen:

Sunnis and Shias began using new terms to refer to each other. To Shias, Sunnis were Wahhabis, Saddamists, and nawasib[those who do not accept the Shia imams and hate the family of the prophet]. To Sunnis, Shias were al rafidha or al turs. Rafidha, meaning “rejectionists,” refers to those who do not recognize the Islamic caliphs and want instead a caliphate from the descendent of Imam Ali. It has become a blanket pejorative term. Turs, meaning “shield,” refers to the human shields used by the enemy infidels. It is permitted to kill these shields. Iraqi Salafis [people who practice a strict, reactionary form of Sunni Islam] call the Shias they kill turs to justify their killings.

... Iraqis were breaking the final taboo: they were asking one another if they were Sunni or Shia. Sometimes this was done obliquely, one asking another about his name, or neighborhood, or tribe. Sometimes it was explicit. ...

... even if the Americans tried to reverse the sectarian trend in Iraq, it is too late. Muqtada’s supporters will not voluntarily relinquish control of the army or the police, and having fought the Americans in the past, many would be eager to fight them again. And who would replace them? There are no nonsectarian Iraqis left, no nonsectarian militia, and no physical space for those rejecting sectarianism. Even secular Sunnis and Shias are embracing sectarian militias because nobody else will protect them. ...

The American failure to provide security has led to the militias. The American sectarian approach has created the civil war. We saw Iraqis as Sunnis, Shias, Kurds. We designed a governing council based on a sectarian quota system and ignored Iraqis (not exiled politicians but real Iraqis) who warned us against it. We decided that the Sunnis were the bad guys and the Shias were the good guys. These problems were not timeless. In many ways they are new, and we are responsible for them. ...

America did this to Iraq. We divided Iraqis. We set them at war with each other. The least we can do is stop killing them and leave Iraq.

Until we take this advice, the United States in Iraq will continue to be more the problem than part of the solution.
Posted by janinsanfran at 6:16 PM