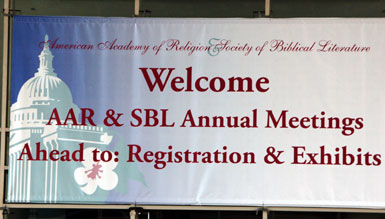 I spent the day wandering around the annual convention of the American Academy of Religion and the Society of Biblical Literature today in Washington, DC.

The AAR meeting draws 7000 or so academics interested in, studying, or teaching religion -- predominantly from the "reality-based" side of the cultural/political divide. That is, these folks do religion, but they aren't, mostly, pre-modern, anti-scientific, authoritarian cranks. The Biblical studies ones know all sorts of ancient languages; the religions studied include not only Buddhism, Christianity, and Islam, but also pagan studies. I might think too many of these folks are complacent professors, but they aren't drawn from our fundamentalist nutcase population.

I know this because I even met someone who read this blog at the meeting -- so they can't be all nuts.

Having spent an intense day, I've no more energy for reporting now, but expect more here later.
Posted by janinsanfran at 8:04 PM