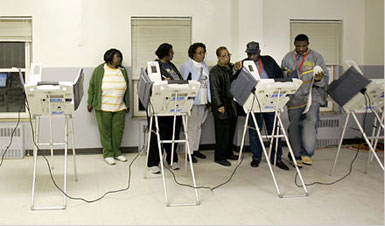 This from an email acquaintance; it rings true to me:

If any of you have been following the news about last night's election, then you know that Cora Howe in East Nashville was one of the last polling precincts to close last night (at 12:45am) & that we have the dubious honor of being the place where the last official voter in Davidson County voted, our machine operator, Bill Flum.

I'm writing because, in spite of the long lines and the rain, I experienced there an extraordinary demonstration of community harmony that reaffirmed my belief that people are basically good and will do the right thing in the face of adversity. I will never again talk blithely about the "apathy of the American voter" because these people showed me that they take democracy seriously.

Many people stayed in line for over four hours, with the last people staying in line for over five, to make their voices heard. And what's amazing about it is that they did it with such good spirits. ... And amazingly, several people had made such strong connections with each other (and with us the poll workers) that after waiting for over five hours, they stayed to watch until the last voter voted and then sang "God Bless America". This was well after midnight.

I was proud of East Nashville last night and humbled because those of us who call ourselves community leaders often have a jaded view of the people we are supposed to be helping and we get tired because it often seems like things never change. But seeing the spirit of those ordinary working folks, I know that I have to keep working to make sure that the people's voices are always heard.

There's a force in peoples' sometimes naive belief in voting. Both right and left trifle with it at their peril.
Posted by janinsanfran at 8:30 AM