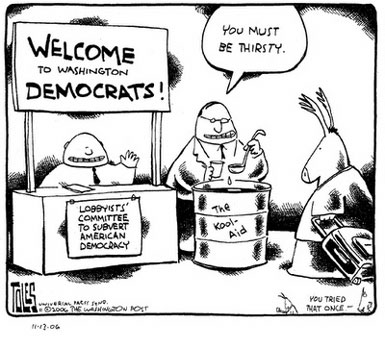 Jeff Zeleny lays out the implications of the Democratic takeover of Congress for Washington's permanent professional class.

Republicans do not cede control of Congress for nearly two months, but money, power and influence are already beginning to change hands. The political economy, at least here in the capital, is humming for Democrats.

Democratic lobbyists are fielding calls from pharmaceutical companies, the oil and gas industry and military companies, all of which had grown accustomed to patronizing Republicans, as the environment in Washington abruptly shifts....

Democrats say the changing of the guard provides a raft of opportunities, second only to winning the presidency.

Former members of Congress who left Washington have placed confidential calls to headhunters, wondering whether firms are hiring. (They are.) Former staff members have fielded inquiries from lobbying shops that have an urgent need for people with current contacts and old relationships with Democratic leaders.

... At the same time, some Republicans began receiving materials on unemployment benefits this week as the party sheds thousands of jobs, relinquishing staff committee assignments and leadership posts in both chambers for the first time in 12 years. ...

Lawyers say they expect their business to increase if House Democrats follow through on their pledge to investigate the Bush administration. Real estate agents paid careful attention to the election results, too, sending welcome packets to newly elected Democrats.

It's a rare wind that doesn't blow some goodies to someone.

Zeleny's article is a cynical little smack at the notion that any politician could arrive in D.C. with good intentions. I'm sure some do. But Democrats will govern as well as the people make them and no better. It's our job to keep them honest; that's part of citizenship.
Posted by janinsanfran at 11:32 AM