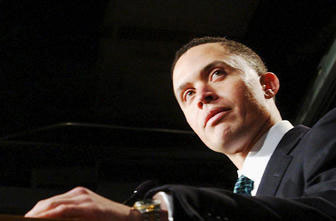 In that one context, they demonstrated that Republicans still own one issue that trumps Iraq, Bush-loathing, a sluggish economy, and lack of healthcare for many voters. That issue is race. Or, more accurately, white supremacy.

Since 1968, Republicans have made themselves the comfortable home of our ample supply of white racists. Sure, they don't wear Klan robes anymore, or usually use the language of explicit racism. But they know who ought to be boss and it infuriates them when people of color step out of their places. An awful lot of those white supremacists are in the South. Yesterday, the Republicans were further confirmed as the party of the white South, losing most of their already diminished presence in New England and slipping in the middle and west of the country. Republicans are on the way to becoming a regional party of anti-modern, racist cranks.

This is a horrendous reality for the most loyal Democrats of all, southern Blacks who make up double digit minorities across the South. Gerrymanders sometimes give them Black representatives, but their power in their states is thwarted by majorities whose unspoken, but real, unifying principle is white racial solidarity.

Nancy Pelosi will lead the first Democratic post-Civil War majority that is not dependent on Southern conservatives. That is a huge realignment, one whose implications will take awhile to work themselves out.
Posted by janinsanfran at 9:30 PM

"Nancy Pelosi will lead the first Democratic post-Civil War majority that is not dependent on Southern conservatives."

What a brilliant observation, which I haven't seen anywhere else.

It will be interesting to see if your prediction bears out and Republicans become a regional party, or if they part ways with their fundamentalist bedfellows (which more than a few party leaders disdain) and try to regain a centrist, libertarian persona.

And how did the evangelical vote split this election? Did Democrats pick up the economic progressive, green evangelicals?

The CNN exit poll data give a picture of the evangelical vote that is complicated by race. When you look at the simplest measure, Democrats won among all religious groups, except Protestants, among whom they got 44 percent. However, when you take out non-white voters (don't know what kind of racial definitions they used) Democrats only got 37 percent of Protestants.

As for the progressive, green (white) evangelicals -- I suspect there is a huge piece of re-education that some leaders will have to carry out before that will be an identifiable evangelical voting block. But I have no data on that point.

Billmon and Digby pick up the theme the next day.

Yes -- Billmon really nails the reality -- and like Digby, I am reading Whistling Past Dixie. Tom Schaller is unflinching in stating the racial realties, something most of us are far too inhibited to risk.

The comment above was removed because it was not only off topic, but also consisted primarily to a long list of links about alternative theories of how 9/11 happened.

There may even be some truth to the commenter's theories -- but please post them to your own blog rather than interrupt this discussion.

There is DEFINITELY truth to my comment. 9/11 was an inside job. Do your own research, you will quickly see what I mean.