The sign pictured here is one of my nominees for worst of the season on esthetic, content and utilitarian grounds. It is ugly; I disagree with its (obscure) message; and I strongly suspect that fans of Jon Stewart are not the people who will be voting to unseat Supervisor Chris Daly. The buyer of these signs is the Golden Gate Restaurant Association PAC, folks whose other business besides defeating Daly is fighting against increases in the minimum wage.

District Six is an odd collection of city neighborhoods -- trendy gentrifying side streets, the Tenderloin red-light district and crowded South of Market alleys, new waterfront condominium developments, and even Treasure Island out in the middle of the Bay. One of the members of the commission that drew the current boundaries of the supervisorial districts described it to me as "everything we had left over when we finished with the other districts."

Chris Daly, the incumbent targeted by the restaurant owners, was swept into office in an open seat election in 2000. He was one of a majority of candidates elected that year who have curbed the power of pro-developer mayors. Daly was the most independent, most brash, of the lot, swept into office from leadership in a movement of tenants against the crazy escalation of rents during the dot.com boom. In office, he continued to act like a protest leader, denouncing opponents and even getting arrested in protests. The city's ruling elite has long been embarrassed to have Daly serving as a duly elected official. Hence the characterization of his aggressive and sometimes abrasive advocacy for his poorer constituents as "temper tantrums."

Daly would be a shoo-in for re-election if San Franciscans were going to turnout heavily. But there is a good chance that we won't. Phil Angelides' campaign for governor has not caught fire; our incumbents, Senator Diane Feinstein and Congressperson Nancy Pelosi, face no serious opposition and are both too conservative for many of us -- there is not a lot to draw people to the polls. So downtown interests are trying to slip a former supervisorial aide of no particular accomplishments, Rob Black, into the District Six position. See here for a good article on the race. 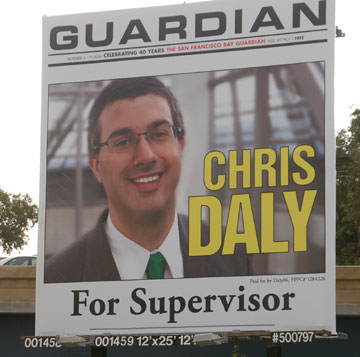 Daly does now concede enough to decorum to wear a tie in his signs. This full-scale billboard is one of the largest political signs I've ever seen in San Francisco. I'm not a huge Daly fan (worked hard for one of his fourteen opponents in 2000.) But I hate the idea of downtown managing to push him out and give the mayor a majority on the local legislature. If I voted in District Six, I'd turnout for Daly.
Posted by janinsanfran at 9:58 PM

I've met Daly a couple of times as a real person rather than in his official role, and have been impressed with what a decent character he is.

The main reason the powers that be in this city want to get rid of him is that he's smart and effective in his advocacy (unlike many leftist blowhards who shall remain nameless). I'm certainly voting for him and urge everyone else who has a chance in District 6 to do the same. The smear campaign against him really has been outrageous.