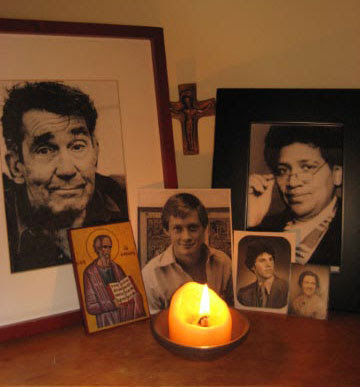 On Thursday, November 2, the Episcopal Church of St. John the Evangelist in San Francisco will mark All Souls Day at 7 p.m. I'll be there.

We've gotten through the night of ghosts and goblins on All Saints Eve, Halloween. Wednesday on the Christian calendar was All Saints Day, the commemoration of the faithful who have gone before. Today we celebrate All Souls. The theology of the difference between the two days is obscure to the contemporary mind -- to get it you have to believe in Purgatory and even the Pope has recently backed off that. In any case, the Feast of All Souls -- Dia de los Muertos -- affords an occasion to remember people who have died. Each year in this blog, I will recall for All Souls someone special to me. See last year's remembrance of Tim Sampson here.

Today I am remembering Judith Chick Downing (1920-2005). Judy was the director of the girls' summer camp in Vermont where I spent 12 youthful summers from 1959-1970. Serving as a sort of lead organizer for her, I learned what hard work and smart management of simple systems could accomplish. Every summer, that camp took in another motley set of pampered, privileged campers and immature counselors, put them through a compassionate wringer, and spit the majority of them out the other end of the experience more capable and more confident women than they had ever thought possible. Judy presided over this intense experience, making sure no one lost track of any of hundreds of details, pushing and prodding those who weren't quite performing up to snuff, and offering warmth and humor to those who would benefit from it. She demanded courage and integrity from her staff and rewarded those who rose to her exacting standards with fierce loyalty. That is, she showed me what good leadership for those who are led could be.

The little group of women who worked closely with her in those pre-feminist, pre-rust belt days used to mutter to each other: "If they let women run the world, Judy would be chairman of General Motors." 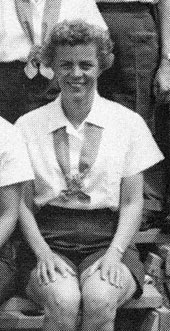 Judy worked her way to eminence in that too-small world from the bottom up. A Massachusetts Commonwealth champion bugler, she went to the camp in the late 1930s on the strength of her horn. A natural athlete, she later taught tennis. After marriage to another great soul, Fred Downing, and two children, the couple, both school teachers, returned to work at the camp in the mid-1950s. Judy was thrust into the directorship when the previous head, a daughter of the founders, died in 1968.

The role was not easy for her; watching her struggle in it helped me understand how class works in the United States. Under the direction of founding family, running the camp meant doing a good job by the young women who attended each summer, however that was construed in different decades. (During World War II, for example, girls apparently got very good at Victory Gardening.) But when the camp became an appendage of a non-profit foundation in the 1970s, being the director came to mean success in mollifying rich parents (paying customers) and donors. Ensuring good outcomes for the campers slipped to second or third place in the hierarchy of necessary skills. Meanwhile, Judy, a natural teacher as well as manager, remained focused above all on the young women under her charge.

Parents and foundation trustees found her simply incomprehensible. Though she was always perfectly polite to them, they sensed that she didn't think they were important. They called her brusque, unfriendly. Over time the charge became more insistent: she was just not quite right somehow for the job. Watching this, I came to understand that her "wrongness" was actually the virtues she brought from a lower middle class origin: her honesty, integrity, and authentic belief in a meritocracy. These are not the values of those who succeed in the current United States.

And so, eventually this immensely talented woman retreated into a defensive posture under a growing barrage of criticism, her great capabilities were stifled, and after 14 years her employers replaced her with more congenial leadership at the summer camp.

Judy took it very hard -- and went on with life, working for another 14 years as the administrator of an old age facility. She was playing doubles tennis with three men until she was 80. She watched birds. And she continued as a gracious mentor to a parade of women, including me, who she had helped to grow into independence.

Rest in peace, Judy Downing. You held on to your integrity when the world ripped the rug out from under you. How many of us can say that of ourselves?
Posted by janinsanfran at 11:54 AM

Jan, thanks for this. I pray for the time when we can hear the stories behind all the pictures, and all the faces without pictures. Maybe this is one definition of the Kingdom - a place/time when everybody's story, eveybody's life, is as important as the next guy's.