NRCAT at the AAR 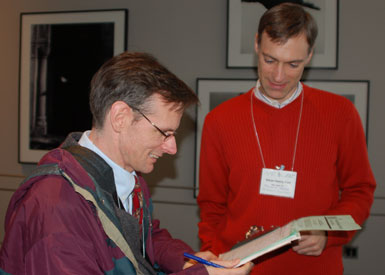 Ethan Vesely-Flad of the Fellowship of Reconciliation collects signatures on a National Religious Coalition against Torture (NRCAT) petition.

A few conferees and friends went to the American Academy of Religion conference determined to suggest that academics do more with their bully pulpits than describe the world's ills. They brought calls to action.

Some sought to collect signatures to this NRCAT statement:

Torture violates the basic dignity of the human person that all religions hold dear. It degrades everyone involved -- policy-makers, perpetrators and victims. It contradicts our nation's most cherished ideals. Any policies that permit torture and inhumane treatment are shocking and morally intolerable.

Nothing less is at stake in the torture abuse crisis than the soul of our nation. What does it signify if torture is condemned in word but allowed in deed? Let America abolish torture now -- without exceptions.

I asked Ethan, pictured above, what it was like to solicit signatures for the NRCAT:

"The ones I find strange are the ones who act like I am soliciting them on the street. They just give a brusque 'no' and rush by. They mean something by this, but I don't know quite what.

"Lots of people almost grab the clipboard from me. 'Of course, I'll sign,' is what they say.

"Others are more thoughtful and read the material, but are glad to sign and to talk."

You can join leaders of major faiths and denominations as well as many others by signing up here with NRCAT to oppose any use of torture by our nation.
Posted by janinsanfran at 8:34 PM