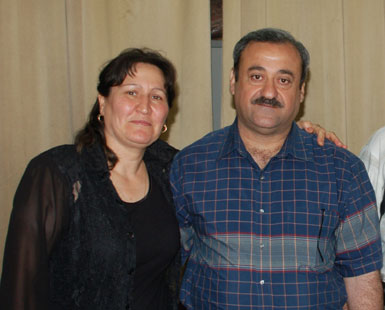 This Iraqi couple had a good life in Basra before the Americans came. He was a television technician. Last summer they were lucky to be unemployed in Damascus.

I have not read George Packer (The Assassins Gate and various New Yorker articles) on Iraq. Why would I bother? The guy supported, cheer led for, the U.S. invasion of Iraq, prima facie evidence of intellectual and moral bankruptcy, even in 2003.

Events have proved true the assumptions I made about this criminal war and its supporters. Those among its intellectual enablers who think of themselves as idealists and "liberals" are now tying themselves in knots as the bloodbath the U.S. and U.K. has wrought plays itself out. Most of them will never simply admit, as they should, "I believed a fantasy of benevolent U.S. hegemony; I didn't care who got killed for my fantasy; Iraqis and U.S. soldiers were not human beings to me, but game pieces on a chess board of my imagination."

The New Republic, home base for U.S. imperialists who claim to be "liberal" and consequently another publication I seldom look at, has just published Packer's cri de coeur for the (additional) Iraqis who will die when the U.S. finally gets chased out of Iraq.

Withdrawal means that the United States will have to watch Iraqis die in ever greater numbers without doing much of anything to prevent it, because [sic] the welfare of Iraqis will no longer be among our central concerns. Those Iraqis who have had anything to do with the occupation and its promises of democracy will be among the first to be killed: the translators, the government officials, the embassy employees, the journalists, the organizers of women's and human rights groups. As it is, they are being killed one by one. ...To me, the relevant historical analogy is not the helicopters taking off from the roof of the U.S. Embassy in Saigon, leaving thousands of Vietnamese to the reeducation camps. It is the systematic slaughter by the Khmer Rouge of every Cambodian who appeared to have had anything to do with the West.

If [sic] the United States leaves Iraq, our last shred of honor and decency will require us to save as many of these Iraqis as possible. ... The U.S. Embassy in Baghdad does not issue visas. Iraqis who want to come to the United States must make their way across dangerous territory to a neighboring country that has a U.S. Embassy with a consular section. Iran and Syria do not; Jordan has recently begun to bar entry to Iraqi men under the age of 35. ...

We should start issuing visas in Baghdad, as well as in the regional embassies in Mosul, Kirkuk, Hilla, and Basra. We should issue them liberally, which means that we should vastly increase our quota for Iraqi refugees. (Last year, it was fewer than 200.) We should prepare contingency plans for massive airlifts and ground escorts.

On this Packer is right, though his continued lies about U.S. intentions and capabilities (pointed out in the quotation) are morally repulsive. These guys never take responsibility -- perhaps no one could.

The peace movement must campaign for the United States to take responsibility for the millions (literally) of refugees our invasion has created, not only by bringing a few here, but also by aiding the surrounding countries, notably Jordan and Syria, where most Iraqi refugees cluster in miserable conditions of poverty and despair.
Posted by janinsanfran at 6:43 AM

Mr. Packer seems to be all over the place these days. In the November 26th cartoon issue of "The New Yorker," he was given the opening "Talk of the Town" editorial section to go on about Democrats' "delusions" about Iraq. There's a presumptiousness about his Zionist assumptions that really are disgusting, but in that sense he is only reflecting the rest of the magazine these days.

It's too bad. As James Wolcott pointed out in a recent, very well written review of "The Complete Digital New Yorker," there are many ways of looking at the strange Mr. Shawn as editor of the magazine over the decades, but as an advocate of peace, the magazine was always brave and on the side of the angels. John Hersey's "Hiroshima" was printed in a single issue, for instance, right after we dropped the bomb. For the Iraq invasion, the best the current regime has been able to come up with is terrifying tales from Seymour Hersh about what the nuts in D.C. and Tel Aviv are up to, and patronizing neocon Tales of the Muslim World from the likes of Jeffrey Goldberg.

With the loathsome David Remnick as editor and the most narrow, reactionary Jewish point of view among most of its writers, the magazine has become very depressing to read. They've finally trashed their own brand, real good.