Afghanistan is not the "good war" 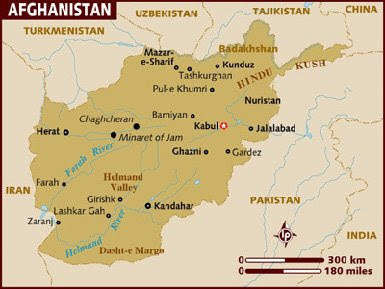 Kudos to Medea Benjamin of Global Exchange and Code Pink for calling out the peace movement for neglecting Afghanistan.

in Afghanistan the peace movement has been missing in action. This has come back to hit us in the face during Barack Obama’s Middle East trip, where he called for sending 10,000 more troops to Afghanistan. John McCain, not to be one-upped in putting our young men and women in harm’s way, is also calling for an escalation of the Afghan war.

In either possible future administration, folks who want the U.S. out of the empire business are going to have to improve our understanding of and demands about U.S. military moves in Central Asia. That's where the war is going.

Ever the historian, I find it worth thinking about how we, peace movement folks, got the point of being so poorly prepared for the struggle ahead. Enough already. We need to turn our attention back to Afghanistan.

This should not be impossible. There's a section of elite opinion (here's Brzezinski) that thinks the empire blew its chances in Afghanistan early on and that further involvement will only mean more dead Afghans and NATO troops for no one's benefit. He hopes maybe the West can bribe local warlords to settle down and cut back on the opium trade.

Moreover Europe would love to get out. The EU doesn't thrive on war.

The peace movement needs to work on getting the message out that all this war in Afghanistan doesn't really have a strategic goal. What do we think we are doing there? Is it anything that anyone should have to die for?

The U.S. may still have a legitimate interest in capturing Osama Bin Laden. 9/11 was a crime. But he's in Pakistan anyway.

The peace movement needs to raise, over and over again, what is the Afghan war for? We can't be satisfied with platitudes and there is no sign we are doing any good for the suffering population there. Time to stop.

Posted by janinsanfran at 2:59 PM