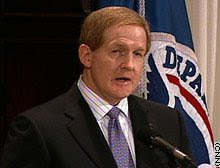 For several years, this blog tracked Transportation Security Administration (TSA) doings closely. (See No Fly Follies on the blog sidebar.) After all, I'd had my own rather dramatic brush with security theater as practiced during U.S. air travel.

In the past year everyone has been writing about it. No terrorists are impeded, but absurdities pile up. In just the last month, it took an act of Congress to get Nelson Mandela off the list. A CNN reporter tries to shed some light and gets hassled by "security." The ACLU has pointed out the famous list is now up 1,000,000 names. It's not just the elite media that have taken notice. The Muskogee Phoenix points out that implies there 133.3 people from the Oklahoma town of 40,000 on the list.

Airlines may face fines over mistaken terrorist IDs
WASHINGTON — The Transportation Security Administration is threatening to fine airlines up to $25,000 when they erroneously tell passengers they are on a terrorist watch list. ...

Airlines compare passenger names to government watch lists before a flight. When airlines find an apparent match, passengers cannot print a boarding pass at home or at airport kiosks and must go to an airline check-in counter with ID to show they are not a suspected terrorist. ...

"We will not tolerate anyone saying to a member of the public that you're on a watch list," [TSA Director Kip] Hawley told the House aviation subcommittee. "That undercuts the credibility of the system."

The mind reels. They create a list (and won't really tell anyone how they assemble it.) They demand the airlines enforce their list. Then they threaten the airlines with fines if the airlines tell people they've been snared by the list.