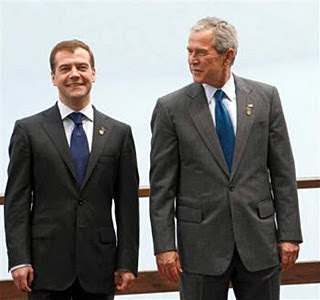 Let's see -- the U.S. has two wars going on and is losing both of them. In addition, it looks as if India and Pakistan might be about to fight a low intensity battle in the middle of one of those wars. And in between these combatants, we're threatening a knockout blow we can't deliver against the country that has gained the most from these ill-advised adventures.

So what does our regime do? Open some more fronts, apparently. The arc of conflict running from Egypt through Afghanistan presents so many horrors, that here in the U.S. we've largely looked away from what the Bush Administration is doing in Europe. Bad idea -- those people need all the surveillance we can muster.

For starters, this week Bush met the recently installed new Russian President (who may just be a stooge for the previous President, Vladimir Putin.) Our boy is at it again, trying to get a read on the new Russian, Dmitry Medvedev. He's a little more cautious than he was when he first encountered Putin, "looked into his soul," and pronounced him trustworthy. But only a little more.

I'm not going to sit here and psychoanalyze the man, but I will tell you that he's very comfortable, he's confident, and that I believe that when he tells me something, he means it."

Meanwhile, Condoleeza Rice is in the Czech Republic signing an agreement to stick part of an anti-missile system there. Thing is, the Russians feel threatened by having a U.S. radar installation parked on their doorstep.

Russia has said it will be forced to react with military means if the US and Czech Republic go ahead with plans for a missile shield.

The statement came hours after the US signed an initial deal to base part of Washington's controversial missile defence system in the Czech Republic.

It's hard not to get the impression that the Russians are seriously pissed off by this Bush move.

And they aren't the only ones. Most Czechs don't want to play the role of Washington's advance base against Russia.

"Do not make a target of us," proclaimed the banner at Letna hill overlooking the Czech capital ...

Polls regularly show around two-thirds of Czech opposed to hosting the US radar. A survey by the CVVM agency published this month showed 68 percent opposed to the US radar.

Meanwhile, Bush reminded Medvedev that though he may have only six months left in office, he is "sprinting toward the finish." Uh oh.
Posted by janinsanfran at 11:24 PM