Those who fought have their day 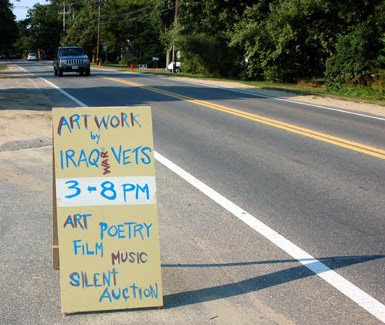 The Iraq Paper Scissors project held an open house at the West Tisbury Grange Hall on Martha's Vineyard yesterday. We were only able to drop by for a minute, but it was heartening to see the range of activities by and for Iraq veterans who need healing as well as to protest the ongoing war.

The project grew out of vet Drew Cameron's long experience of paper making. After his tour of duty and discharge from the Army, he had the idea of making the fabric his uniform into paper.

One day, Cameron put on his Army uniform for the first time since he left the military and began to cut it off his body. "My heart started beating fast," he reports. "It felt both wrong and liberating. I started ripping it off. The purpose was to make a complete transformation." ...

Somewhere along the way, it occurred to Cameron and Matott to turn the uniform into paper... Cameron gathered seven young veterans at St. Lawrence University in Canton, N.Y., where they cut a uniform (donated by a Marine who had worn it in Iraq) into small pieces, cooked it, beat it into pulp, and formed it into sheets of artist-quality paper.

Then they started to make art, some on video, some as drawings, some as collage. 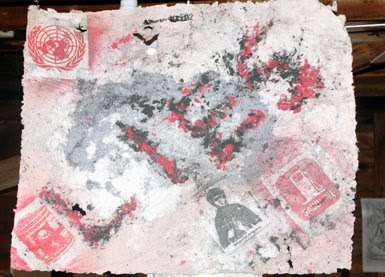 Here is one of the products on view yesterday. 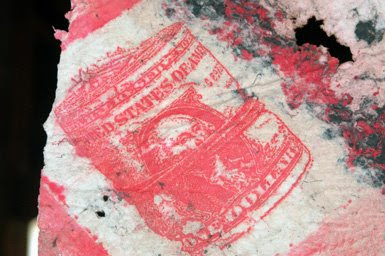 Detail from the piece above. 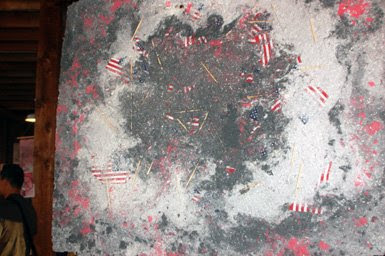 This vet artist was fascinated with flags. 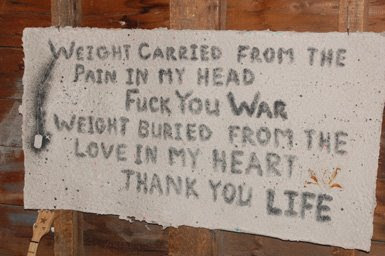 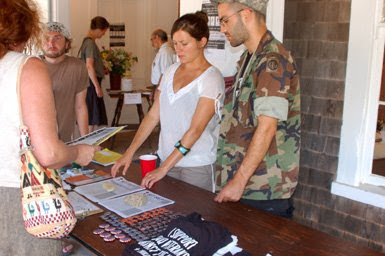 Outside Iraq Veterans Against the War purveyed the merchandise of protest. 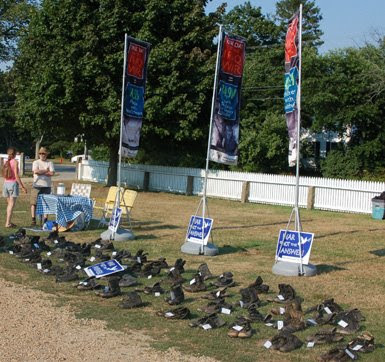 While yet further outside, the Martha's Vineyard Peace Council set up the Eyes Wide Open display of boots memorializing fallen Massachusetts soldiers.

Posted by janinsanfran at 12:13 PM