Looking ahead to "after Bush" 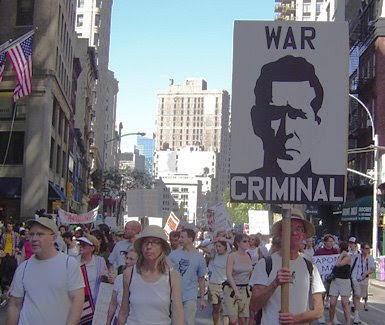 Lots of well-known progressive bloggers are at Netroots Nation in Austin today. Good for them. Some of us couldn't make it. Nate Silver of Fivethirtyeight makes an interesting observation.

The focus is more on long-term organization and party-building, House and Senate races, and governance if and when Obama takes office [than on the Presidential race].

Good. Having watched the Democrats in Congress flounder since 2006, we need to be organizing ourselves about these matters now.

My friend Brendan Smith and his writing buddy Jeremy Brecher have contributed to thinking about "after" in a new Nation article laying out nine reasons to investigate war crimes. Their reasons are worth remarking. Here they are with my comments [in brackets.]

Here are nine reasons why we must not let bygones be bygones:

1. World peace cannot be achieved without human rights and accountability.

According to Supreme Court Justice Robert Jackson, chief American prosecutor at the Nuremberg Tribunals, "The ultimate step in avoiding periodic wars, which are inevitable in a system of international lawlessness, is to make statesmen responsible to law." Moving in that direction will be impossible unless such responsibility applies to the statesmen of the world's most powerful countries, and above all the world's sole superpower... [First we have to convince the people of the United States that peace itself is a good, devoutly to be wished for, and worked for. One of the lessons of the Bush regime is that too many of us don't know this. We haven't had a war on our soil, except to seize Indian land, since the 1860s. The awful, but more theatrical than materially damaging, attacks of 9/11 were enough to throw us for a loop. Most of the world has more immediate experience of war and knows viscerally that peace is a value to cherished and nourished.]

2. The rule of law is central to our democracy.

Most Americans believe that even the highest officials are bound by law. ... [Powerful people always think that doesn't apply to them; they are special exceptions. Societies work when the powerful are wrong. This one is not currently working.]

3. We must not allow precedents to be set that promote war crimes.

Executive action unchallenged by Congress changes the way our law is interpreted. According to Robert Borosage, writing for Huffington Post, "If Bush's extreme assertions of power are not challenged by the Congress, they end up not simply creating new law, they could end up rewriting the Constitution itself." [Hey, aren't we supposed to use the amendment procedure to change the Constitution?]

4. We must restore the principles of democracy to our government.

The claim that the President, as commander-in-chief, can exercise the unlimited powers of a king or dictator strikes at the very heart of our democracy. ... Countries like Chile can attest that the restoration of democracy and the rule of law requires more than voting a new party into office -- it requires a rejection of impunity for the criminal acts of government officials. [We're not electing a warrior general this fall. We're electing a politician who represents and in good times leads us in ways that serve the country. Generals are employees of the country. Presidents are employees and leaders of free people. When they get uppity and ignore the people, they should get tossed.]

5. We must forestall an imperialist resurgence.

When they are out of office, the advocates of imperial expansion and global domination have proven brilliant at lying in wait to undermine and destroy their opponents. ... [I am very concerned with this principle. They need to be locked up or at least permanently excluded from legitimate politics.]

6. We must have national consensus on the real reasons for the Bush Administration's failures.

[Otherwise they'll be selling the stab in the back crap as long as they live. And they hang around -- they still think they would have won in Vietnam except the American people failed them.]

...To establish international legitimacy, we must demonstrate that we are capable of holding our leaders to account. [Obama seems a natural for the role of restoring US reputation -- but he'll need some substance, not just glitz.]

8. We must lay the basis for major change in US foreign policy.

...The American people must understand why international cooperation rather than pursuit of global domination is necessary to their own security. And other countries must be convinced that we really mean it. [Tough stuff. We actually might get the first part if only because our once globally dominant economy no longer delivers. But will the rest of the world put up with us?]

9. We must deter future US war crimes.

The specter of more war crimes haunts our future. Rumors continue to circulate about an American or American-backed Israeli attack on Iran. ... Holding war criminals accountable will require placing the long-term well-being of our country and the world ahead of short-term political advantage. [When we were wealthy and powerful enough, we sometimes understood that honey beats vinegar hands down. Think the Marshall plan. Even, think AIDS funding for Africa. If this country wants positive roles to play, it can find them.]

These writers are pointing to an uphill struggle that serious progressives are going to have to wage come 2009, whoever gets elected. Another Nation writer, Ari Melber, reports from Netroots Nation that holding the criminals accountable is not much on the agenda of at least some Obama advisers.

Cass Sunstein, an adviser to Barack Obama from the University of Chicago Law School, cautioned against prosecuting criminal conduct from the current Administration. Prosecuting government officials risks a "cycle" of criminalizing public service, he argued, and Democrats should avoid replicating retributive efforts like the impeachment of President Clinton -- or even the "slight appearance" of it.

Oh yeah, the "take it off the table" route. But all is not hopeless. Not long after Melber posted that, Sunstein got back to him:

Update: Sunstein emailed to emphasize that he also said and believes that "egregious crimes should not be ignored."

In general, "our leaders" are better at remembering that they are supposed to enforce the law when we keep banging away at them to do their jobs. Lots of work ahead.

Posted by janinsanfran at 10:34 AM

Email ThisBlogThis!Share to TwitterShare to FacebookShare to Pinterest
Labels: rule of law

Jan, Thanks for this. First I've heard of this and we need to think right now about post-election.

Could I add Medicare for All to your list...time's running out.

In an appearance on Democracy Now with Glenn Greenwald, Sunstein was if anything worse: lying about the content of the new FISA law, dismissing Greenwald's points about accountability as "emotional", unable to pronounce the military tribunals at Guantanamo show trials, and (simultaneously!) more concerned about bipartisanship than justice wrt possible criminal trials of Bush-Cheney officials:

It’s important to think, not in a fussy way, but in a way that ensures the kind of fairness our system calls for. It’s important to distinguish various processes by which we can produce accountability. I don’t believe the courtroom is the exclusive route. Congress is our national lawmaker, and there are processes there that could have a bipartisan quality. There are also commissions that can be created, commissions that can try to figure out what’s happened, what’s gone wrong and how can we make this better.


When I talk about a fear of criminalizing political disagreement, I don’t mean to suggest that we shouldn’t criminalize crimes. Crimes are against the law, and if there’s been egregious wrongdoing in violation of the law, then it’s not right to put a blind eye to that. So I guess I’m saying that emotions play an important role in thinking about what the legal system should be doing. But under our constitutional order, we go back and forth between the emotions and the legal requirements, and that’s a way of guaranteeing fairness. And as I say, very important to have a degree of bipartisanship with respect to subsequent investigations.

In the face of what we know about the policy of torture, the twisting of the Justice Department to partisan purposes, the hints about the scale and purpose of the warrantless domestic spying, and the complete and total Republican Congressional complicity in all this, having "a degree of bipartisanship" in the investigations seems neither possible nor particularly desirable except as a way to blunt them.

Link to DN with Greenwald and Sunstein quoted above.