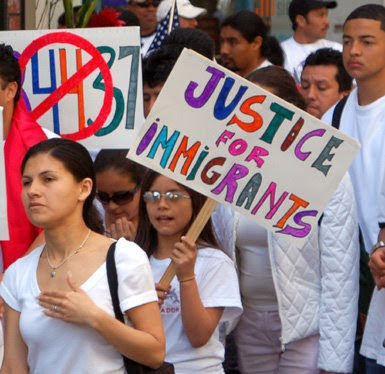 Apparently, despite the howls of restrictionists like Lou Dobbs, we're calming down about immigration. The Gallup organization reports a poll showing that the percentage of U.S. citizens favoring cutbacks in immigration has fallen from 58 percent immediately after 9/11, to 45 percent last year, and only 39 percent this year. Moreover, 64 percent of us think that immigration is a good thing for the country -- and only 27 percent expect that immigration issues will be "extremely important" in how they vote in November. 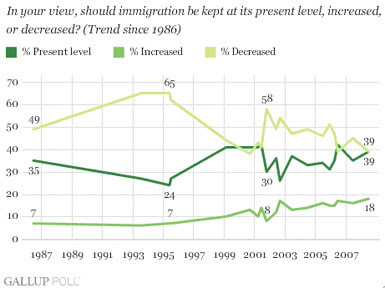 In fact, for all the screaming, broad opinion trends have pretty much reverted to where they stood in 2000 -- except the number wishing for more avenues for legal immigration seems to have risen from about 12 to 18 percent.

And despite the stuttering economy, fully 79 percent think immigrants "take low-paying jobs that Americans don't want," up from 74 percent two years ago. It doesn't look as if most people are clamoring for more I.C.E. raids, checkpoints on roads and in bus stations, and mass deportations. Somebody tell the Bush Administration.

One reason the aggregate numbers appear more friendly to immigrants than past polls is simply the growing size of the Latino segment of the U.S. population. While majorities of whites and blacks think immigrants "cost U.S. taxpayers too much," fully 65 percent of Latinos insist immigrants "pay their fair share."
Posted by janinsanfran at 10:21 PM

it's reassuring to know that most americans are decent, caring about this issue. but frustrating to read more bad actions like the ones in postville, iowa--as if it did not matter what most of us want.

cannot believe supposedly sane bloggers who talk about not voting democratic as if they'd never considered what the alternative means. and just heard about the green party nominees...will that pull some still long for the earlier ralph nader? oy!