Rock-star philosopher on our election 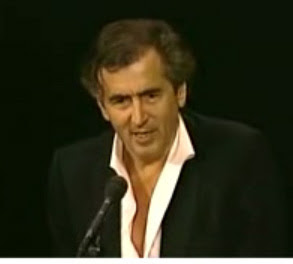 Bernard-Henri Levy is a French philosopher and writer. If we were French, apparently we would know of him. Here in the United States, we are only likely to perhaps have encountered his controversial book Who Killed Daniel Pearl? or his American Vertigo : Traveling America in the Footsteps of Tocqueville, a journalistic encounter with contemporary U.S. democracy and society. In the last year, he's been lecturing on a phenomenon he calls "the new global anti-semitism."

Not too surprisingly given his current preoccupations, he's recently published his thoughts about the U.S. campaign in The New Republic. The article is thought provoking. There are assertions that immediately remind one that this is a remote observer -- he simply gets things wrong. McCain is absolutely not "surprising in his opposition to torture and Guantanamo..." When push came to shove, McCain came right around to supporting Bush's weakening of military prohibitions on torture. And no one really on top of the campaign would ask: "When will the below-the-belt stuff begin? On what Internet site will the first photomontages appear of Barack Obama tricked up as a radical Islamist?" That garbage has been out there for months.

Nonetheless, Levy makes a couple of assertions that seem to me worth thinking about.

Unlike, say, Jesse Jackson, Al Sharpton or Condoleezza Rice, [Obama] does not carry with him the heritage of slavery or the memory of segregation because he was born of a Kenyan father. The difference is enormous, because the mirror he holds up to America is no longer one that reflects those dark times, no longer one of unbearable ancestral culpability. Barack Obama can win because he is the first African-American to take, by the grace of his birth, a step away from the two sides of a deep divide--and the first who may now play the card--not of condemnation or damnation--but of seduction, and--as he says over and over--of reconciliation.

However much Obama and his campaign may want us to put it aside, the U.S. history of racism -- our peculiar, particular structure of white supremacy -- will shape this campaign. The first Black man to get a serious shot at the Presidency necessarily navigates a minefield of fears and hopes. That we don't see him doing this doesn't mean the racial hazards aren't there -- it just means Obama has been, so far, supremely good at overcoming surface-level prejudices with inspiration. Levy may be onto something in pointing out that it is the immediateness of his African roots, having a father from a newly post-colonial, independent state, that allows him to leap past rather than confront directly the hurdle of historic white guilt. Of course he is a Black man in this United States, so he also knows, and is careful not to arouse, the deeper-level racial animus that could be let loose by a false move. We are seeing a virtuoso racial tightrope performance and cheering the guy while holding our breath at his boldness.

The other Levy tidbit that bears some consideration:

America has changed. ... one could also... see the shock and desperate mobilization of an America that knows it is dying but is trying nonetheless to delay the moment when it realizes it must surrender.

Levy doesn't explicate this further. He seems to be a man on a mission to develop a U.S. audience to go with his French one; perhaps he doesn't want to alienate the customers?

Here's what I think this means: the current campaign does show that there is a considerable mass of people in this country who know something has to give. The country isn't working for too many people. Ruling the empire by force isn't working. It looks as if pretty soon the planet will stop working. Obama says "change" and masses of us attach our sense of unease to the "hope" he offers. Levy and Obama have spotted a genuine cultural current and Obama may well ride it to the Presidency. Levy thinks he will.

Will this movement that Obama now rides, though it is not of his making nor will he necessarily be able to master it, carry us anywhere we want to go? That might be still up for grabs. Obama needn't be the only one grabbing the potential energy we feel on the knife edge between hope and terror. We live in interesting times.

Posted by janinsanfran at 10:49 PM

I think that Levy may be on to something in his commentary on Obama's not carrying in his body the history of African slavery. But I suspect that the particular group of people who find it reassuring that Obama is not the descendant of slaves are not the hard-racist minority for whom black is black, but the guilt-ridden white majority.

For these folks, Obama is a Black man whose anger they do not have to fear, and towards whom they need not feel guilty.

What that means about an Obama presidency and its implications for people of color in this country, I don't know.

Yes -- this is about Obama navigating the garbage thrown up by white guilt. The good news is that that "Black is Black" white folks are a minority. The bad news is that the "guilt-ridden white majority" is still race obsessed.

And meanwhile many young people of all races react: "Plueeze, drop all the 60s stuff."

He's a bit of a right-wing hack, but as usual context is everything. French right-wing hack is a "rock-star philosopher" compared to our version of the same thing, and I'm not being ironic.