This morning I read a sensible protest about the contemporary U.S. political culture from Todd Gitlin:

Political so-called leadership blusters on Mondays, Wednesdays, and Fridays, and purveys fear on Tuesdays, Thursdays, and Saturdays. For eight years now, the country has found this moral cowardice acceptable. It's enough to make you believe that the nation is in a fever of individual self-seeking, a miasma of moral default, as long as its political leaders fear to say ringingly today that we are not afraid. 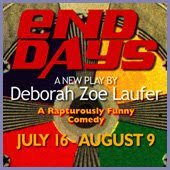 Last night I saw amazing evidence that we needn't be mired in post 9/11 bluster, bombast and bullshit forever. Would you believe it is possible to write a successful light comedy about how the family of an executive who escaped the World Trade Center lurches toward putting their lives back together? Deborah Zoe Laufer has done just that in "End Days," currently being produced at the Vineyard Playhouse. Here's a plot summary.

Sixteen year old Rachel Stein is having a bad year. Her father hasn’t changed out of his pajamas since 9/11. Her mother has begun a close, personal relationship with Jesus. Her new neighbor, a sixteen-year-old Elvis impersonator, has fallen for her hard. And the Apocalypse is coming Wednesday. Her only hope is that Stephen Hawking will save them all.

This isn't high art and probably wouldn't survive deep thought, but it is laugh-out-loud funny. We're beginning to heal, if we are willing.

Posted by janinsanfran at 8:39 AM