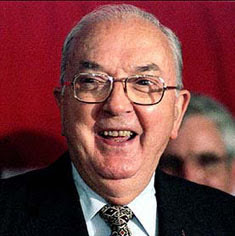 Jesse Helms finally did something for his country. Die.

Won't make any difference in the long run if passage of FISA shreds the Fourth Amendment a day later, but it's nice to know the old racist was good for something.

UPDATE: Jesse's still persecuting the principled. RALEIGH - L.F. Eason III gave up the only job he'd ever had rather than lower a flag to honor former U.S. Sen. Jesse Helms.

Eason, a 29-year veteran of the state Department of Agriculture, instructed his staff at a small Raleigh lab not to fly the U.S. or North Carolina flags at half-staff Monday, as called for in a directive to all state agencies by Gov. Mike Easley.

When a superior ordered the lab to follow the directive, Eason decided to retire rather than pay tribute to Helms. After several hours' delay, one of Eason's employees hung the flags at half-staff. ...

Eason, who had worked for the Agriculture Department since graduating from college, was paid $65,235 a year as the laboratory manager.

The News and Observer

Posted by janinsanfran at 8:41 PM

A shout-out to Mandy Carter(Founding Board Member Emeritus at National Black Justice Coalition and self-described “southern out black lesbian social justice activist”) and others who worked so hard for so long to defeat Jesse Helms.