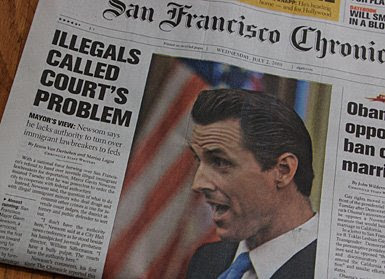 Really, I'm sympathetic to the San Francisco Chronicle's need to sell newspapers. And all I have to do is pick one up to know the familiar birdcage liner is in trouble. It's shrunk to a sliver of its former self.

But I could sure do without its periodic campaigns to demonize someone or something in order to attract attention. Last summer it took aim at the 200 or so of San Francisco's homeless people who take refuge in Golden Gate Park. Day after day, a columnist bashed the campers and the authorities who didn't remove them.

This week, the Chron found a juicy target in the city's sanctuary ordinance and the slightly dopey measures city officials have taken to comply with it.

What's a "Sanctuary" law? It's a promise to undocumented immigrants that local authorities won't turn them over to immigration police unless absolutely required to do so by law. As recently as April, San Francisco pols were proud of how San Francisco enforced its ordinance. From the mayor's website:

In 1989, San Francisco passed the "City of Refuge" Ordinance (Sanctuary Ordinance) which prohibits City employees from helping Immigration and Customs Enforcement (ICE) with immigration investigations or arrests unless such help is required by federal or state law or a warrant. The Ordinance is rooted in the Sanctuary Movement of the 1980’s, when churches across the country provided refuge to Central Americans fleeing civil wars in their countries.

In February 2007, Mayor Newsom reaffirmed San Francisco’s commitment to immigrant communities by issuing an Executive Order that called on City departments to develop protocol and training on the Sanctuary Ordinance.

The Sanctuary Ordinance helps to maintain the stability of San Francisco communities. It keeps communities safe by making sure all residents feel comfortable calling the Police and Fire Departments during emergencies. It keeps families and workforce healthy by providing safe access to schools, clinics and other City services.

"As a Sanctuary City, San Francisco has and will continue to provide compassionate services to all immigrants, regardless of status," said Supervisor Ammiano. "When certain people are targeted and denied access to vital social services, the health and safety of the entire city is compromised."

That all sounds pretty sensible and probably most of us here agreed -- until the Chron broke the news that the city was dealing with undocumented Honduran juveniles picked up for dealing crack by flying them home at city expense. Hmmm. That does seem a little wacky. And now mayors, and juvie bureaucrats, and the U.S. Attorney, and judges are all throwing around this hot potato in a desperate attempt to leave someone holding responsibility for the (now ended) policy. It's hard to blame the Chron for having some fun with this.

However, as is often the case, our elected Public Defender Jeff Adachi made one the few sensible responses to the revelation:

"We see these children as children. The law states that we must act in the best interest of the child. These are not cookie-cutter situations. Most come from very poor families, in some cases very repressive countries."

Wouldn't want to take context into account when we're in a panic, now would we?
*** 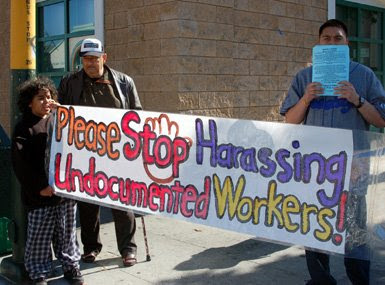 Meanwhile, out in the 'hood, tenacious folks from Brigada Contra Las Redadas (Brigades Against the Ice Raids) were holding a sign outside the Police Station at 17th and Valencia yesterday afternoon. They live in another reality. Out here, according to their flyer:

Swarms of police suddenly appear to attack street vendors, youth on street corners...arresting people because they "look like" they are criminals or don't move quickly enough.

The I.C.E.-MIGRA police are allowed twice a week to arrest undocumented immigrants in SF. Then they can be deported.... because San Francisco is not really a "Sanctuary City".

Somehow, I bet real life is a little more like this for most of our undocumented workforce than it is like the Chron's picture of a foolish, "illegal"-coddling paradise.

But I don't have to sell papers.
Posted by janinsanfran at 12:42 PM