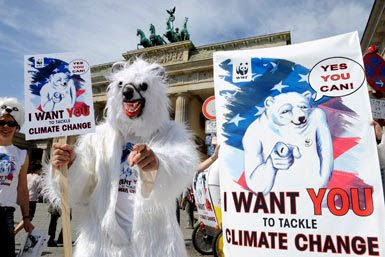 Good to know these folks were out for Obama's Berlin speech, reminding him of people's expectations.

A vivid memory from 1993: I was commuting across the Bay Bridge, listening to a new President deliver his first State of the Union address. He was very impressive. He obviously understood the policy implications of every topic he touched on. After a senile Reagan and a tongue-tied Bush, his obvious intelligence and competence was luminous.

I said to myself: "I'm going to hate this guy."

Why you may ask to did I have this reaction to Bill Clinton? Because the 1992 campaign with its theatrical execution of a retarded Arkansas prisoner, its staged Sister Souljah moment, had convinced me that, glad as I was to have a Democrat in the White House, this one had no political morals. And without principle, brains make a ruler worse, not better.

This morning I read with interest this from M.J. Rosenberg at TPM Café.

I think I have read every word Barack Obama uttered on his visits to Israel and Palestine and I'm struck by his ability to navigate this tricky issue with such dexterity. ...

I just talked to a friend who saw Obama in Israel. I asked him what his friends in the Israeli media are saying. "What are they saying? They are saying that he's the next President. And they think he's the smartest American politician they have seen yet."

Now Rosenberg is an over-the-top Obama partisan and after the last seven years the ability to walk and chew gum is enough to make a presidential aspirant look like a step up -- but Obama does seem, like that last Democrat, to be genuinely smart. (That Israelis are so enamored of him doesn't bode well to me for any justice in that part of the world, but we'll see.)

If we could create NATO to face down the Soviet Union, we can join in a new and global partnership to dismantle the [terror] networks that have struck in Madrid and Amman; in London and Bali; in Washington and New York.

The smart bit is inserting the one almost respectable (not grossly authoritarian or plutocratic) Middle Eastern ally in the list of states needing to partner against terrorists. A staffer may have come up with it, but Obama was smart enough to put it in without hitting a false note.

So am I going to hate this smart Democrat? Depends on what he does with power. He has shown in the FISA fight that the issues raised by the national surveillance state are not very important to him. I don't trust him to put people before empire, though he clearly has some sense that U.S. hegemony is running into limits. There will be massive financial constraints on what he can accomplish domestically. He seems to understand that climate change is real and threatening.

But no, though I easily trust him, Obama's obvious smarts don't horrify me. This is a novel feeling about a potential president and it is very pleasant.

Posted by janinsanfran at 1:07 PM