The backwash of war crimes endures 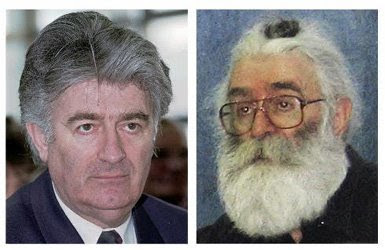 The arrest of Radovan Karadzic yesterday seems both a belated nod toward justice (wonder if aggressive warriors Bush and Cheney are noticing?) and yet another indication of how tortuous progress toward an international rule of law necessarily is. Karadzic was the leader of the Bosnian Serbs 1992-1995 during their all-too-effective attempt to "ethnically cleanse" Bosnia of Muslims and Croats. He has been a fugitive from a war crimes indictment by the International Tribunal for the Former Yugoslavia ever since.

I have to confess that I pretty much didn't do the work during the 1990s to try to understand the vicious wars that followed on the break up of Yugoslavia. I had good excuses. I was busy working against a series of populist racist initiatives in California and against Bill Clinton's choice to tear up the federal safety net for poor mothers in the name of "welfare reform." Moreover I was guilty of an intellectual fault I'm sometimes too eager to point out in others: I had worked hard to understand a series of U.S. imperial adventures in Southeast Asia, Africa and Central America. The ongoing Balkan horror story was about white Europeans and didn't seem to be directly something the U.S. had brought about -- my paradigms for looking at events didn't fit. I'd have to learn a lot of new, hard stuff to make any sense of these events. I looked away instead.

An Obama administration is likely to be full of people whose paradigms were formed looking at the failings and (few) successes of international response to the Balkan disaster. Adviser Samantha Power is the most prominent example. If we want to know what they are likely to champion, those of use who attend to U.S. international behavior would be wise to study the history of 1990s. 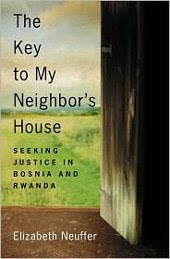 To that end, I've been reading Elizabeth Neuffer's The Key to My Neighbor's House: Seeking Justice in Bosnia and Rwanda. I would highly recommend this approachable, human, journalistic account of the 1990's two most horrific genocides. (Did I really just write that sentence?) Neuffer had the guts to go where the killing was fresh and an ability to get people to tell her the abominable things they had survived. She also sympathetically reported on the stumbling efforts of create courts to bring perpetrators to justice -- and the search for reconciliation that would somehow reconstitute societies blown apart by violence. No big conclusions here -- but lots to mull over. She wrote, explaining why she had presevered in writing about these horrors:

That tyrants are punished, that societies heal, that individuals find justice are the responsibilities of us all -- in order that they not become our fate.

Elizabeth Neuffer became one of the early civilian casualties of the current U.S. war on Iraq when, while reporting for the Boston Globe near Samarra in May 2003, the car in which she was riding struck a guardrail and turned over.

Posted by janinsanfran at 11:18 AM

There was a very interesting piece on R. yesterday on NPR, an interview with someone (from the UK from the sounds of it) who had met him and reported on him (or perhaps the person had been in politics - I caught the interview in the middle). Well worth searching for.

The man is stark raving mad, in addition to everything else. In an incredibly devious way. If you find the piece (or I can look this evening - can't remember the show, it wasn't All Things Considered, it was The World or Day to Day or one of those) it might be worth posting the link.

I meant R.K. I'm not on first name basis with him.

I appreciated your thoughtful post, and have put the Elizabeth Neuffer book on reserve at my local public library.

Perhaps I have a disagreement with you on one point. You write that "The ongoing Balkan horror story was about white Europeans and didn't seem to be directly something the U.S. had brought about..." It seems to me that US government efforts to destabilize Yugoslavia were directly responsible for the horrors that followed.

I dug up the following link on an old floppy disk, checked it, it still works:

Thanks for all the work you've done.

whoops. looks like that link didn't show up correctly. let me try it again:

Here's the link that anon. wished to include. Probably the vital assertion there reads "Western-backed neoliberal macroeconomic restructuring helped destroy Yugoslavia. Yet, since the onset of war in 1991, the global media has carefully overlooked or denied its central role."

I will readily concede I can't say whether that is a fair summation, though a long life in the empire makes me disposed to give it a chance at being explanatory.

I have not found the interview Jane R. refers to -- sure it is there somewhere, but can't find it now.

Actually heard it that day on a podcast. Its NPR Day to Day for July 22. Interview by Alex CoHen with John Burns from the NYT around min 13. Can't find a direct link to it right now for some reason. Thanks Jan for all your excellent blogging.