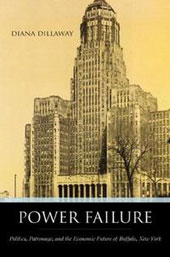 When people ask me where I "come from," I usually answer, "my parents lived in Buffalo, New York." To the few who ask more about Buffalo, I add: "Buffalo is a sad, segregated city which lost its economic reason for being sometime in the 1940s. Most people with ambition and gumption got out, so it has been run ever since by those who couldn't or wouldn't leave." That's probably grossly unfair, but it is how it looks to this escapee who left in the 1960s and has since prospered on the Left Coast.

Knowing that I probably don't give my birthplace its due, I turned eagerly to Diana Dillaway's study, Power Failure: Politics, Patronage, and the Economic Future of Buffalo, New York. Like me, Dillaway comes out of Buffalo's old white, WASP elite; like me, she moved on the west coast to learn about cities that work, or at least work differently.

Dillaway used her social connections to get access for interviews with the movers and shakers of Buffalo civic life in 1987 and 1996. She presents a catalogue of parochialism, lack of imagination and pure inertia on the part of those with power. I can believe these individuals did contribute by their mistakes to Buffalo's decline, but I wonder whether better leadership really could have done anything to stem the cascading tide of failure set off by economic irrelevance. Of the great rust belt cities, only Pittsburgh seems to have fared much better; Cleveland and Detroit are also studies in collapse.

In order to get her interviews, which are the linchpin of the book, Dillaway had to promise her subjects complete confidentiality. And she largely kept her promise, though there are hints about identities, especially in the pictures. This sort of bargain may work for an academic exposition of an abstract paradigm of urban failure, but in a more popular case study with a quasi-journalistic tone, it makes the book seem secretive, as if the author had something to hide. I don't think she is actually hiding something -- I just think she can't write the story as she really understands it.

After reading Power Failure I checked out what others had to say about it. Anyone truly concerned about the future of Buffalo might want to look at a thoughtful, if scathing, review by a couple of SUNY luminaries who charge that Dillaway, like the parochial class she derives from, has failed to situate the prospects for the city of Buffalo in the context of its economic region. The charge rings true to me. My father never stopped dismissively labeling the suburbs that enjoyed what little growth and prosperity survived as "the sticks."

Buffalo has an unfair, lousy rep -- all about snow and layoffs. That's too bad. It can be green and lovely in the right seasons. The small scale of civic life can be attractive. But the place needs an economic engine and it hasn't yet found one.
Posted by janinsanfran at 12:28 PM

You don't visit often, do you? Guess you haven't heard about the dramatic new investments in downtown loft conversions and offices. Richard Tobe, the commissioner of economic development, says that City Hall has collected more $$ in permit fees in the last two years than they did in the previous ten-fifteen combined. To follow all the dramatic news, tune in to:

An opinion 40 years old has absolutely NO CREDIBILITY.

You need to come back home for a weeekend and see what's happening in Buffalo now. I moved to Buffalo 10 years ago. I've lived all over the country and the world - I've never experience a City as amazing as Buffalo. Yes, it had it's decline, just like every other major industrial city, but it's on it's way back now and wow is it incredible to see.

Yo, we're just trying to live our lives and get by. The truth is that we can afford what we need here- and what we want. It is depressing as hell to have our family members leave- never to return. It is frustrating to see those in office twist in the wind and get fat on the taxes we pay. And it's also getting a little scary to live near people with very obvious genetic issues- it;s like all the good DNA left, and the marginal DNA is getting more polluted with each 15 year generation.

But we're just trying to get by.

Gosh folks -- sorry to have hit your defensive hot buttons. I actually love Buffalo and have been there quite recently. But the substance -- that the city does not seem to have found an economic engine -- seems to me all too true.

Here's an opinion from less than 40 minutes ago: you are right. Not to worry, Jan - you know some people are going to jerk their knees when their town is mentioned.

Sad and inert, yes. Moribund, even. I've lived in Buffalo since 1982 (Cheektachooga before that) and watching the long, slow decline hasn't been fun. For every trumpeted step forward (new building! 50 jobs! castles in the air!) there are at least two steps backward (more closings, 100,200,300 more jobs gone) ..

While a few small areas, such as along Elmwood and the "better" parts of the upper West Side are doing okay, most every other neighborhood is in trouble.

The Buffalo area can be a decent place to live IF you have a good income from a secure career; otherwise, it's not a good place to be middling or poor (not that being poor is much fun, anywhere! )

Many people get Dillaway wrong. She's more interested in larger trends and naming names would only feed gossip mill.

Met her and wrote about it here: At the Merrieweather - Diana Dillaway.

Her major point, missed by most of your commenters - sadly, I should add - is that City need to take citizens seriously. They still don't. V. very sad subject with the recent realigning of the deck chairs.

it's okay if people who don't live in Buffalo don't like Buffalo. fewer complainers that way.

I appreciate that this is a book review, but you DID speak many hot-button opinions that appeared to come from your mind rather than from the book. In any case you did not distinguish.

I don't want to shout you down, because most of the country would say the same after a visit to Buffalo. I feel sorry for those people, people who expect prosperity, comfort, culture, and entertainment to be created by others, brought to them directly, and even marketed well. They will never see the qualities that make so many of us stay despite whatever adversities there really are. They tend to stay in the (pitiful) suburbs and venture out only for shopping or chain restaurants.

I also wish that you and all others who have the chance would think about and mention the reasons behind urban decay and dysfunction, and the harm that befalls our entire nation as a result. In my perception, the factors that are real are simply bad business decisions (steelmakers), and the rest is a fantasy of public perception.

For one example, why was this such a popular place in 1900 (probably #3 in the nation), before central heat and snow plows, and now people can't stand the (much milder) weather? Why do people complain endlessly about snow that is so beautiful, that gives you rare recreational options and an occasional day off work? Why do they trade this for hurricanes, earthquakes, drought, flood, tornadoes, poisonous snakes and bugs, and oppressive summer heat? You can't fix those things with a good coat and boots.

In this country there is always another place to go where the grass seems greener, so people flee the old urban areas for the suburbs, then flee one suburb for another, then flee the hollow city for one that's not hollow, then do it again. There is no reason more solid than the changing value of a pork belly and no end to the abandonment, decay, and shabby new construction unless we force one somehow. Our goal should be to keep solid cities such as in Europe, perhaps by limiting options.

One last thing – imagine the difference if we could buy Niagara Falls’ electricity at $.005/KWH instead of paying the state average ($.111 on my last bill)? That’s just more false economy. We need appropriate political representation, not more inappropriate pessimism.

Don't worry Bass Pro will come some day and give us all office jobs. We will party all night at the casino, and spend our weekends on the city beach! We gonna bring back "Talking Proud", and "You're gonna wanna live in Lackawana". Anyway I think the Sabres are the hottest thing on ice. You can't have your cake an eat it too.