Another "homeless crisis" -- where's the plan? 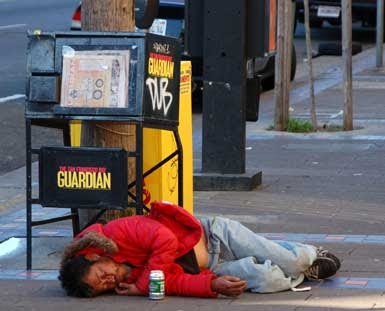 Perhaps this guy served his country once upon a time.

Since last week I bashed the SF Chronicle's C.V. Nevius about his columns bashing the homeless, I should mention that he wrote a more realistic column today about the next "homeless emergency" we can anticipate.

Bobby Rosenthal, regional manager for homeless programs at the Department of Veterans Affairs, estimates that one third of the more than 6,000 homeless people - about 2,100 - in San Francisco are veterans. [Homeless advocates would say those numbers were a gross undercount.]

And no wonder the number is so high. California leads the nation in homeless veterans by a mile, according to the National Coalition for Homeless Veterans. The 2006 numbers showed 49,724 homeless vets in California. The next nearest state was New York with 21,147.

Yup, the Iraq vets who'll end up on the streets are on the way, juiced up on meth, disoriented, traumatized -- and swept out of sight by the government that shipped them off to fight an unnecessary war.

"You know what scares me?" asks [Swords to Ploughshares counselor Tyrone Boyd.] "I haven't heard a plan (from the federal government) about what they are going to do when the troops come home. What's the plan?"

Now why would he think there would be a plan? There wasn't a plan for Iraq when they conquered it -- why would they care about the broken human lives they spit out from this adventure or the cities that will absorb them?

Posted by janinsanfran at 9:28 PM

Indeed! Why would anyone expect the Bush maladministration to have a plan? This problem will be passed on to the next administration, along with a host of other problems. The Democrats in Congress seem content to allow this to happen.