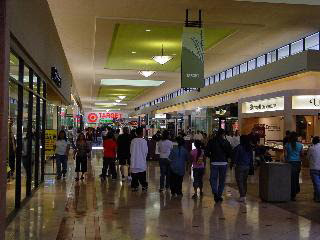 The day before Christmas, the California Supreme Court gave the people of this state a very special present. It issued a decision reaffirming that mall owners cannot prevent free speech on their property. Writing for the 4-3 majority, Justice Carlos R. Moreno asserted that

"a shopping mall is a public forum in which persons may reasonably exercise their right to free speech."

The case at issue involved union members asking mall customers to boycott a store within the facility. The court decided that malls may regulate speech and behavior to prevent disruption (and they do rather rigidly), but they cannot discriminate between speech they like and speech they oppose, such as calls for a boycott of a tenant. This finding upheld a 1979 California ruling that protects some speech on mall property

Not surprisingly, the dissenting judges thought the right of property owners to control what they own should trump citizens' free speech.

According to the L A Times,

Eugene Volokh, a constitutional law professor at UCLA, said California and a few other states back free speech at large malls on the theory that they function as modern-day town squares.

"That's where people congregate these days, and that's where it's important that free speech be protected," he said.

Volokh and the court are right, if we hope to preserve a culture of democracy -- small "d". Preserving some public entitlement to free speech in privately owned, public used, spaces is much like the fight to protect "net neutrality", the regulations preventing telecommunications carriers from playing favorites among those who use their pipes.

Very few states are as supportive of free speech in malls as California. For example, in 2006, a New York court severely limited protests by antiwar activists outside a mall which housed a military recruiting station. The judge agreed that the recruiting station was a government facility and so a proper target of protected speech -- but nonetheless limited protests. Protesters could demonstrate on Saturdays, from noon to 2 p.m., and only on the sidewalk outside the glass-fronted mall. Otherwise commerce had to be protected from disruption.

Different states approach the issue from different angles, while the Federal courts come down hard on the side of property:

Federal courts have held that the U.S. Constitution provides no public assembly rights in privately owned shopping centers. But state courts are allowed to adopt greater protection for free speech on private property.

Five states -- California, Colorado, Massachusetts, New Jersey and Washington -- have held that the government may require mall owners to permit some political activity in common areas of the mall.

The California and Washington decisions relied on public-referendum laws, in which proposed laws can be put on the ballot if enough signatures are collected. ...

Extending free speech access as much as possible onto private land used for public functions is as important a cause as maintaining the openness of the internet. In most of our car-centered, sidewalk-free suburban, exurban and semi-urban settings, private venues are the only public spaces.
***
The photo at the head of this post shows the corridors of the Serramonte Shopping Center in Daly City. I spent many a weekend in its parking lots and corridors in the early 1970s alerting customers that a grocery store inside was selling grapes picked by non-union farm labor. Mall security personnel were sometimes quite threatening, but we'd haul out copies of the then-current law allowing our speech and politely push the envelope. As I think about it, pushing the envelope in quasi-public spaces seems a good practice for democrats -- small "d".

Posted by janinsanfran at 11:37 PM