Why I will not vote for Hillary Clinton 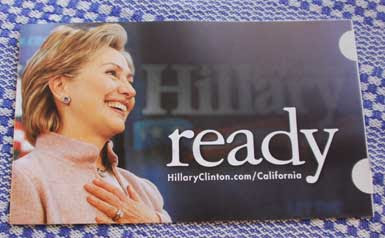 Right on time it has started coming: campaign mail from candidate Hillary Clinton. It's a nice 16-page 4-color brochure. Since I'm a Democratic California "permanent absentee" -- and female, over 60, and single as far as the government is concerned -- I must be in the Clinton's target demographic. So why am I so sure she won't get my vote in the February primary?

For a long time, I let myself slide on this question. Not liking Clinton was reflexive. The company she keeps is unsavory. Her chief strategist is the odious Mark Penn, who made his political chops encouraging President Bill to throw poor women under the onrushing train wreck called "welfare reform." Penn also specializes in union busting and lobbying for energy companies. Besides, unlike many Democrats, I don't look back fondly to Bill's term; long before he derailed any meaningful policy agenda because he couldn't keep his dick in his pants, he was willing to trash Black people to pacify a white audience (see Bill's Sister Souljah moment) and to prove his toughness by presiding over the execution of a retarded criminal. I'm no Bill fan.

A post by "eriposte" at The Left Coaster reminded me that my picture of Senator Clinton fit all too well with several narratives that hostile males, especially conservative ones, commonly throw at powerful women -- and anyone crazy enough to want to be President is certainly ambitious and potent in some ways.

1. Strong woman meets powerful, insecure men.
There has always been a glass ceiling for women. ... Breaking the ceiling can be a challenging exercise even for strong and accomplished women because of insecure men in positions of power who cannot deal with them. Women sometimes have to do a lot more and appear stronger than a man in a comparable position to command the same amount of respect or achieve the same career success. Yet, women who do even the exact same things that most men do are sometimes portrayed negatively despite and because of that.

According to this portrayal, when a man does it, it is a sign of self-confidence, vision, and strength of character but when a woman does it, it is the opposite - she's labeled cold, harsh, calculating, overbearing, or non-feminine. The reason I'm bringing this up is that Senator Clinton has long been portrayed in the media as having a somewhat cold or calculating persona who would do anything to stay in power ...

2. Strong woman meets the vast and powerful Republican misinformation machine.
... Soon after former President Bill Clinton and then-First Lady Hillary Rodham Clinton arrived in D.C., Clinton-hatred became the de facto operating philosophy of the self-crowned media elite in the country. ...The result was that Sen. Clinton was dealt a double-whammy. She was in the unfortunate position of:

* Being a strong woman detested by powerful, sometimes insecure, often conservative men in Congress, and
* Being irrationally hated by the even more insecure charlatans occupying powerful positions in the media ...

All of this rings true. Of course Clinton is a tough cookie and that is not an adequate reason to critique her. 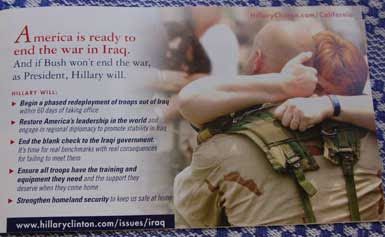 If I'm to be principled in my distaste for her candidacy, my distrust has be about what she (not her husband) stands for. And on some issues I care about, she is as good as the competition and maybe better. Her version of health care provided through insurance profiteers seems more plausible than Obama's, though not as good as Edward's. She seems solidly opposed to torture.

However, on Iraq and U.S. empire, she is just not believable. After all, though she says she'll end the war, she also plans

She voted in favor of Bush's designation of part of the Iranian armed forces as "terrorists," precisely the sort of meaningless school yard taunting passed off as foreign policy that any serious leader would avoid. If that's not triangulation -- weaseling with people's lives for political gain -- I don't know what is.

Yet there is an appeal to the idea of a woman president. Gennifer Flowers, who once had an affair with Bill Clinton, feels it.

The one-time other woman in Hillary Clinton's life says she's considering casting her vote for the former first lady.

"I can't help but want to support my own gender, and she's as experienced as any of the others, except maybe Joe Biden," Gennifer Flowers said in a recent phone interview from her home in Las Vegas.

Flowers said she is still undecided about whom to vote for, supports abortion rights and long has wanted to see a woman in the White House.

But that wise woman, Molly Ivins, shortly before she died last year, perfectly expressed the opposite thought which dictates finally that I cannot vote for Clinton in the primary.

Enough. Enough triangulation, calculation and equivocation. Enough clever straddling, enough not offending anyone ... Sen. Clinton is apparently incapable of taking a clear stand on the war in Iraq, and that alone is enough to disqualify her.

Oh yeah -- if she's the nominee, I'll probably vote for her in November 2008. But I'm not going to work for this one. There are better things to do in a general election than work for another bad President. 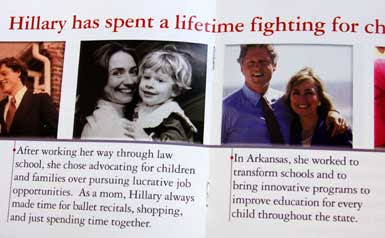 Posted by janinsanfran at 9:42 PM

what about her stand on Israel and the Palestinians? and on the wars Israel waged on Lebanon? There is more than Iraq in US policy in my part of the world.

Clinton's approach to Israel and its wars is pure cowtowing to AIPAC (Zionism). I remember being in New York City and seeing how the tabloids roasted her while she was running for the Senate when she made the mistake of being polite to Arafat's wife. Never again for her.

Trouble is, in this she is no different from any of the others. All the Democrats bow and scrape before the Israel Lobby. That's pretty much their identity.