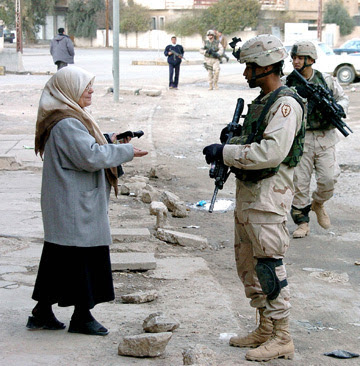 We in the United States hear that our military has won a great victory and that Iraq is more peaceful. Let us hope there is more truth than political expediency to those reports. We broke the place, we're the problem, any easing of the immediate fear of death and destruction for ordinary Iraqis is good news.

But what sort of society have we wrought in their country? There's a tidbit of reporting by the Iraqi journalist Jenan at Inside Iraq that casts all too much light on conditions in "pacified" Baghdad. Less than perfect English is preserved from the original, though I've added some punctuation.

One week ago, we started work of the end year story that we share the work together. Sunni journalist took the Sunni neighborhoods and Shiite journalist took the Shiite neighborhoods. I was excite to do this story. I had to visit one family in each of mine neighborhood, I mean the Shiite majority neighborhood. But when I started my trip to do my job I faced so many difficulties not because the fears of the militias or terrorist.The difficulty was that most people feel afraid from the journalist and they deal with them as spies who work to serve the interest of their enemies. ...

New Baghdad [is] one of the mixed neighborhoods so to get more benefit for our story I should talk to Christian person to ask him or her about the security in the neighborhood. As usual I couldn’t stop oneone in the street to talk to because this thing can be done only in Democrat countrie not Iraq. So I phoned my Christian friend who guided me to her grandmother to interview her.

Next day my friend phoned me to ask about the kind of conversation that I took part with her grandmother.

"it was about the security situation in the neighborhood" I answered.

She said, "my grandmother doesn’t feel comfortable she is afraid that conversation will bring troubles for her"

"Why? she did not say anything may cause troubles" I replied.

"Please Jenan don’t use this conversation in your story…. That what my grandmother wants"

"Ok dear I will not, don’t worry". Oh God why people are terrified from journalists. We try to help our country by showing the truth no more, no less. ...they afraid may we hurt them if we publish their opinion about what is happening in Iraq.

They've learned, under the dictator and amid the chaotic violence we've brought. Who's been driven mad, the interviewee, the journalist, or those of us who peer into the fishbowl at them? What are we going to do about it?

Posted by janinsanfran at 8:51 AM