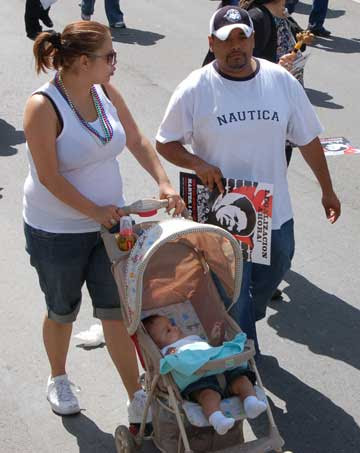 According to the Pew Hispanic Center, Republicans are losing whatever success Texan George W. once had drawing Latinos to his party.

After spending the first part of this decade loosening their historic ties to the Democratic Party, Hispanic voters have reversed course in the past year, a new nationwide survey of Latinos by the Pew Hispanic Center has found.

Some 57 percent of Hispanic registered voters now call themselves Democrats or say they lean to the Democratic Party, while just 23 percent align with the Republican Party – meaning there is now a 34 percentage point gap in partisan affiliation among Latinos. In July, 2006, the same gap was just 21 percentage points – whereas back in 1999, it had been 33 percentage points.

Well duh -- when Republican candidates use televised debates to call your uncle or your child or your brother bad names, you probably won't cozy up to them. Democrats may not be perfect, but their leaders are usually not obviously vicious.

What our Republican nativists don't understand is that hardly any family in our low-wage, newcomer work force is all on the above-board citizenship track or entirely undocumented. The reality is usually a mix of people in a mix of statuses -- and nobody takes kindly to having their relatives dissed by a bunch of dumb old white men who never did a lick of dirty work in their lives. And more and more Latinos can vote, so it is getting to be pay back time for Republican racists.

Posted by janinsanfran at 9:19 PM