Much ado about not much:
California's convenience voters 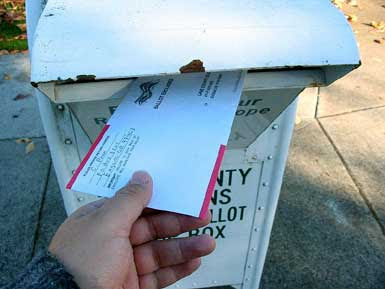 Last week just about every newspaper in the state and some online media reported on a Field Research profile of convenience voters in California -- that is, a study of folks long designated "permanent absentees" who will soon be called "vote-by-mail" voters in accordance with a new state law. Guess what? These folks are not just like to the other people who go to the polls.

While Democrats outnumber Republicans 42 percent to 34 percent among all California voters, the GOP holds a 41 percent to 40 percent edge with permanent mail voters.

While Bay Area counties have 21 percent of California's voters, they have 29 percent of permanent mail voters....[ Election officials in Los Angeles County, concerned that a flood of mailed-in ballots could overwhelm the system, have been reluctant to encourage people to sign up for permanent mail status.]

Nearly a third of the permanent mail voters are age 65 or older, far more than the 19 percent among all California voters. Three-quarters of the mail voters are non-Hispanic whites, compared with 66 percent overall.

She's a white, well-to-do, educated woman who is older than 65 living in the Bay Area in a home that she owns.

No one who works in campaigns will be surprised by these findings -- for a political junkie's jaded reaction see this short item by Brian Leubitz.

So, does it matter that convenience voting attracts an electorate so skewed away from demographic pattern of the general voting public? Perhaps. Let's tease it out.

The state of Oregon chose to go to all mail balloting through an initiative passed in 1998. In Washington State, 34 of the state's 34 counties use vote-by-mail. They provide some experience to look at. On the positive side of the ledger, voters who vote by mail by and large say they like it. Once the kinks get worked out, voting by mail seems to be at the very least "fraud-resistant" -- it certainly leaves an auditable paper trail, unlike computer polling systems that reputable researchers fear are vulnerable to hacking. Mail voting is cheaper to run than polling place voting, although the Oregon version does still provide some physical drop off points.

On the other hand, political scientists are largely convinced that convenience voting does not increase turnout among unlikely or infrequent voters. (Research discussed here.) The Field study adds data supporting that conclusion -- those old white Republicans are already likely voters.

In his contribution to the frenzy of commentary last week, venerable Sacramento Bee columnist Dan Walters sought to remind his readers that expanding convenience voting may not work out entirely as they expect:

It used to be quite difficult in California for someone to vote via mail, rather than in person at the polls, but about 30 years ago, a Democratic Legislature and a Democratic governor decided to loosen up on what was called "absentee voting."

The Democrats believed that it, along with easier voter registration, would counteract Republicans' edge in voter turnout.

The maneuver backfired big time in 1982 when Republicans mounted a strong -- albeit somewhat stealthy -- drive to increase absentee voting among party loyalists and help their candidate for governor, George Deukmejian, in what shaped up as a close contest with Democrat Tom Bradley. ... Bradley won among Election Day voters, as exit polls accurately confirmed. ... As the mailed ballots were tallied, however, the tide began to turn. It soon became apparent that Deukmejian had won the governorship.

... going to all-mail elections... would alter political dynamics even more in ways -- as demonstrated a quarter-century ago -- that could not be easily foreseen.

He's not going to go out on a limb with a prediction about how vote by mail would play out -- but he's sharp enough to flag the question.

What irks me about this discussion is the tendency of progressives to assume that getting more people to vote by mail will somehow automatically benefit our causes. This is magical thinking of the same sort as San Francisco's embrace of rank choice voting. Too many of us get seduced by the happy idea: "change the mechanics and that will give us different [better] outcomes."

Last fall when the label for California convenience voting was changed from "permanent absentee voting" to "vote by mail", Steven J. Ybarra , of Hispanic Vista.com provided a sample of the kind of magical thinking that doesn't help.

I am beginning a campaign to change every Latino voter to VBM!

It is about political power. It is about ending the control of the media vampires. Now we need a real 58 county strategy in California now that every voter does really count!

California needs Ybarra's campaign, but we aren't going to get it through a mechanical fix. Bringing Latinos into the electorate will take the laborious person-to-person organizing that community groups and unions have done for decades. There is no magic fix.

The Field study actually demonstrates that voluntarily adopted convenience voting skews the electorate away from the people who form the progressive base: away from Democrats, the young, renters, inexperienced voters, non-whites. The state may eventually decide to conduct elections by mail. If we do, progressives need to think creatively about how to neutralize the present inclination in our constituencies to avoid this method of casting their ballots. If we don't work on this, we aren't going to be happy with the results.
Posted by janinsanfran at 9:36 PM