Responding to the harm done by our rulers 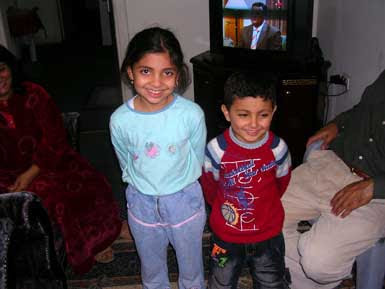 The photo above and the story below both come from the Collateral Repair Project, which describes itself as "an attempt to respond to harm caused by one's government by collaborating with injured persons and communities." Working with Iraqis who were themselves displaced by the U.S. invasion, CRP supports human scale assistance to a few of the hundreds of thousands of Iraqis now stranded in Jordan. These folks may be physically safe, but they have no income and live in fear of being deported back to death in Iraq. This is one family's story.

Um and Abu Shahed [the mother and father of son Shahed] left Iraq in March of 2005. They have 2 children, a boy age 5 and a 1/2 in kindergarten and a girl in 3rd grade. They pay 130 dinars per month rent and have no source of income other than small amounts their parents are sometimes able to send from Iraq. Abu Shahed is afraid to seek work in Amman for fear of being arrested and deported back to Iraq, a certain death sentence for him.

Um Shahed was a college administrator in Baghdad prior to the invasion. She is a seamstress, and also a professional cook and wants to be part of the Collateral Repair Project cook book project. Their daughter wants to be a teacher and smiles, openly proud, when she tells us that she has the highest grades in her class. The boy, just 5 1⁄2, already knows what he wants to be when he grows up: "a painter" he says without hesitation.

Abu Shahed worked for American forces as a translator in a police academy from July 2004 to February 2005, when insurgents issued a threat to his wife, telling her "this curse has to be removed ". "We had just purchased a small house near my parents," Abu Shahed tells us, "in the area of Baghdad that was a popular, thriving shopping area." After the death threat delivered to Um Shahed, "we were seeing armed, masked men posted on our street, watching our house and decided it was time to leave." Had they asked for American protection, he adds, his whole family would have become targets for the militia. "They would have all been killed. So I quit my job, sold the car and most of our possessions" he says. "We had money, but it is all gone now."

He describes his once thriving neighborhood in Baghdad as a ghost town since the Americans walled it in. "People came from all over Baghdad to shop for specialty foods and items." Sunni and Shia lived side by side and, as is common throughout Iraq, inter-married. Most of the shops are closed now, and only people who live in the area can enter through the checkpoints." He remembers saying prior to the American invasion "I would have welcomed the devil" to be rid of Sadaam" ...

The U.S. certainly hasn't been taking any serious responsibility for the human tragedy on-going inside and outside Iraq. In July according to the Washington Post, the U.S had admitted only 133 Iraqis applying for visas to come here over the previous 9 months, despite promising to take in at least 7000 by September. And 7000 itself amounts to nothing, given that the United Nations estimates that 2 million Iraqis have fled their county. Most are in Syria and Jordan, both poor countries that fear being overwhelmed by the influx.

For a personal account of an Iraqi's flight to Syria, check out Riverbend at Baghdad Burning.

In the summer of 2006, the delegation I was part of to Amman and Damascus met with Faiza who is now one of the main collaborators in the Collateral Repair project. In this "season of sharing" please consider a gift to this very personal humanitarian intervention. You can click on the picture of Faiza on the blog's sidebar or on this link.

Posted by janinsanfran at 9:54 AM