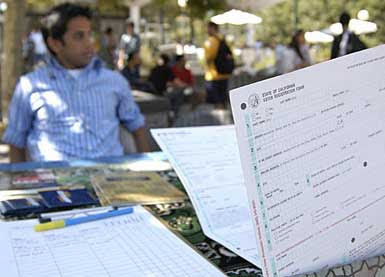 Recently a sociologist at UC-Irvine, Jen'nan Ghazal Read, looked into Muslim-American political activity. Her review of various sources led her to conclude that, when it comes to engaging with the political process,

"Muslim immigrants are not any different from earlier immigrant groups who came to America –- they are motivated by the same desire to integrate and achieve a better way of life," Ghazal Read said.

"So what this means in terms of their political involvement is that the same things that dictate your average American's political attitudes and behaviors –- socioeconomic status, marital status, race/ethnicity, age, gender and so on –- dictate their attitude and behaviors."

Still she unearthed some interesting tidbits: While trying to grasp the significance of this data, I decided to find out how many Muslims -- immigrants, citizens, foreign born, native, etc. -- lived in the United States. I was a little surprised to learn that I had wandered into a minefield.

Because, by law, the U.S. Census does not collect data on religious affiliations, all figures given for the number of adherents to various religions in this country are estimates based figures offered by religious bodies and on demographic guesswork. When it comes to the number of U.S. Muslims, since the religion doesn't have any central authorities, there is no central place to get a number. Immigration authorities also do not (officially anyway) keep data on religious affiliation. Not all Arab or South Asian newcomers are Muslim; many are Christian or, among South Asians, Hindu. On the other hand, migrants from Europe are sometimes Muslims.

Moreover, in the backwash of right winger's enthusiasm for lighting up an anti-Muslim "clash of civilizations," counting U.S. Muslims has become a political issue. Muslim civil rights organizations attack a study funded by the American Jewish Committee that in 2001 came up with the number 1.8 million. They say it was designed to minimize their influence. The Islamophobe Daniel Pipes apparently cites this one. The Council on American Islamic Relations (CAIR) and Dr. Sayyid Syeed, secretary-general of the Islamic Society of North America (ISNA) have insisted that there are 6-8 million U.S. Muslims. And many individual Muslims, in the post-9/11 security panic, just want to keep their heads down.

Regardless of what the real number may be, in U.S. politics what matters is that Muslims, like many other interest groups, are participating in ever greater numbers in the political process. Some stories of that participation are collected here. With time and effort, that means the country will have to take some account of their views.

Posted by janinsanfran at 11:17 PM