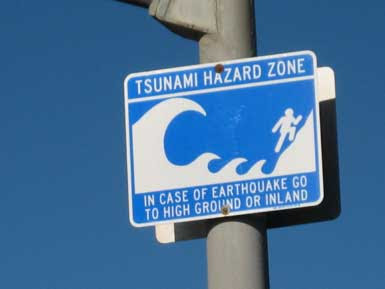 Recently these signs have been turning up along one of my regular running routes adjacent to San Francisco's beachfront. I have to admit, I figured they were some kind of bureaucratic ass-covering. Along most of the ocean perimeter, a 20 to 30 foot mound carries the four-lane Great Highway and hides the city's sewer system. The houses of the Sunset District sit behind that barrier. Since I've run the path hundreds of times over the years, I admit I sometimes day dream about how far a tsunami would carry into that pleasant, but somewhat landmark-free, neighborhood. It find it hard to imagine a wave carrying far after it cleared the berm. 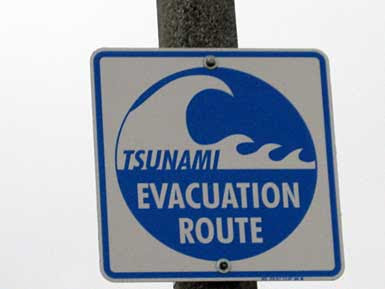 Apparently I was wrong to be so confident that a tsunami striking the coast would not get far onto the land. On March 27, 1964, an earthquake off Alaska set off a wave that not only caused massive damage in the far north, but also killed in Crescent City in northern California. Story here. After the 2004 Asian tsunami, some scientists who studied it claimed that a West Coast earthquake might produce "waves that send water surging up the coast to much greater heights than previously anticipated..."

In 2005, the California Seismic Safety Commission warned that we should consider ourselves vulnerable.

There have been 80 tsunamis in California during the past 150 years, and geological records show previous waves reached heights of 60 feet or more.

The indications are simple, said Lucy Jones, scientist-in-charge for the U.S. Geological Survey in Southern California -- a long earthquake after which the water recedes.

Jones says beachgoers seeing the water recede should run far inland and stay away from the beach for at least 12 hours, since tsunamis are actually a series of waves that can last for hours.

"You need to know that if you have a five-minute earthquake, there will be a tsunami," Jones told the Times. "That's inevitable.... The really terror scenario is that it's a summer day and there's a million people on the beach."

Maybe those proliferating blue tsunami signs really will help us be more aware of a threat that could become reality any day. If the siren ever goes off when I'm down there, I'm not going to hang around looking for a wave.