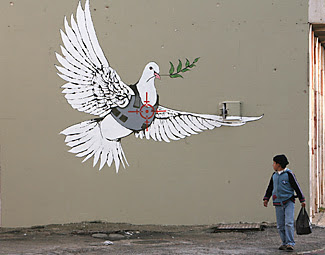 The writing on Bethlehem’s wall: A Palestinian boy looks at a dove painted by British 'guerrilla' artist Banksy on the wall dividing Bethlehem on the West Bank. Amar Awad/Reuters

The number of Christian pilgrims visiting Bethlehem was a major story in mainstream media over the last 48 hours. Most of those puff pieces, at least the ones in the U.S., didn't include details like these from London Times Online:

Tens of thousands of pilgrims from around the world descended on Bethlehem yesterday, encouraged by the recent Middle East peace talks and lull in violence. ...

Those gathered outside the Church of the Nativity included American tourists with Santa hats, Japanese pilgrims in silk robes and faux white beards, and Palestinian Scouts in Scottish kilts. ...

In his homily delivered at Midnight Mass, the Latin Patriarch Michel Sabbah, the top Roman Catholic official in the Holy Land, delivered a politically charged appeal for peace and love in the city of Bethlehem — and independence for the Palestinian people.

“This land of God cannot be for some a land of life and for others a land of death, exclusion, occupation, or political imprisonment,” said Patriarch Michael, the first Palestinian to hold his position.

Patriarch Michael could only enter Bethlehem after passing through a massive steel gate in Israel’s separation barrier. Israeli mounted policemen escorted him, in his flowing magenta robe, to the gate, and border police clanged it shut behind him.

For something of the flavor of the experience of passing through the Israeli Wall daily, watch the You-Tube below:

***
And at least around Bethlehem, some pass through the Wall. Not so for most Palestinians caught in the giant prison that is Israeli-encircled Gaza.

The siege against Gaza has completed its six months 1.5 million of population are not allowed to travel outside Gaza, ...

in the middle of all that Israeli military operations are continuous ongoing practice, 20 Palestinians at least were killed last wee , many were injured in military incursions and air [raids] in different areas of the Gaza Strip. ...

Xmas time is so close, from Gaza I send my love... I ask you while celebrating and rejoicing, not to forget us in Gaza. ...

When it is late, it is not acceptable for the world to say: WE DID NOT KNOW WHAT WAS HAPPENING IN GAZA!

Posted by janinsanfran at 7:50 PM

Email ThisBlogThis!Share to TwitterShare to FacebookShare to Pinterest
Labels: Palestine