Pelosi signed off on torture 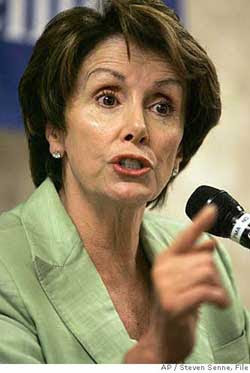 So my Congresswoman was among the scared Democratic rabbits briefed by our spooks in 2002 on their torture plans. No wonder she can't make any real effort to rein them in.

In September 2002, four members of Congress met in secret for a first look at a unique CIA program designed to wring vital information from reticent terrorism suspects in U.S. custody. For more than an hour, the bipartisan group, which included current House Speaker Nancy Pelosi (D-Calif.), was given a virtual tour of the CIA's overseas detention sites and the harsh techniques interrogators had devised to try to make their prisoners talk.

Among the techniques described, said two officials present, was waterboarding, a practice that years later would be condemned as torture by Democrats and some Republicans on Capitol Hill. ... With one known exception, no formal objections were raised by the lawmakers briefed about the harsh methods during the two years in which waterboarding was employed, from 2002 to 2003, said Democrats and Republicans with direct knowledge of the matter.

... [Representative Jane] Harman [who later wrote a letter objecting] said she had been prevented from publicly discussing the letter or the CIA's program because of strict rules of secrecy.

"When you serve on intelligence committee you sign a second oath -- one of secrecy," she said. "I was briefed, but the information was closely held to just the Gang of Four. I was not free to disclose anything."

It should be noted that Harman famously doesn't like Pelosi and vice versa, so there may be more to this story.

Of course there is a bit of 20/20 hindsight in thinking these wimps should have protested shaming their country. They were not only scared of the muscular men of spookland and GWB's faux-macho, they also thought dangerous Saudi and Taliban fundies might be hiding under beds. Still, the revelation is disgusting.

Not going along with the unthinkable requires thinking about it in advance and training oneself to recognize what lines should never be crossed. These practices are not much part of rising in politics. Apparently Nancy Pelosi's much ballyhooed Catholic education by Notre Dame nuns and Trinity College did not serve her when push came to shove.

Posted by janinsanfran at 8:55 AM

Nothing surprising. What is her stand on what Israel does to the Palestinians? On the Israeli wars against Lebanon? So torturing Iraqis is of course OK. Palestinians, Iraqis, Lebanese are Arabs, no?
How many US politicians have taken a stand against killing Arabs with US taxpayers money?

Pelosi is pure, power-sucking scum and always has been. She deserves to be shunned everywhere she goes in San Francisco. Unfortunately, the revelations aren't surprising, but they are finally out in the open, which just possibly might make a difference.