A nice fantasy for the New Year 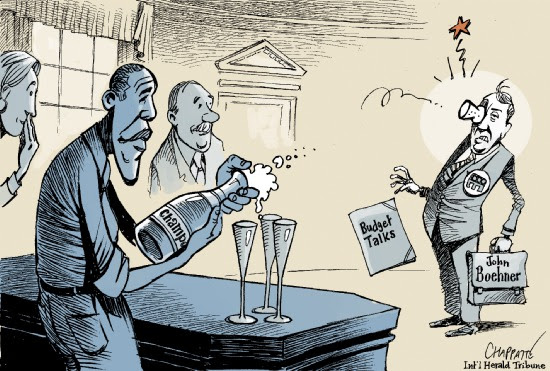 As I write, the "fiscal cliff" talks seem to have collapsed. Maybe those guys in Washington will put them together again, maybe not. I can't bring myself to care.

The realities of the situation remain the same: government has certain necessary tasks that it must perform for the common good. We argue about what those tasks are, but in the last election the majority of the people rendered some clear direction: All these items except the last cost money. Roughly speaking, the policy of President Obama and the Democrats is to get the money for the government to do its job from the people who have the money -- that is, from rich people. It is the policy of the Republicans to put the government out of business. We rejected the latter option.

For the moment, the Prez and his fractious Democratic partners seem to be hanging tough, sticking up for the people who put them in office. The fantasy is that Dems will stay the course. The degree to which they do so will depend on how much heat they feel from constituents. We can't let up on them -- that's my fantasy for the New Year.
Posted by janinsanfran at 5:00 AM