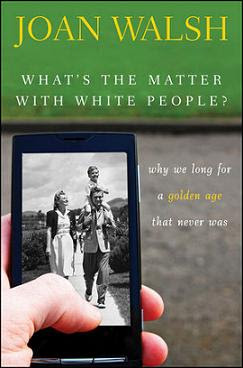 I strongly looked forward to the public library acquiring Joan Walsh's What's the Matter with White People?: Why We Long for a Golden Age That Never Was. Walsh spent six years as Salon's editor in chief. I've read her for years and learned to trust her consistent injection of a woman's perspective into the all-too-male enterprise of progressive liberal punditry. Besides, as a white woman myself, I wanted an answer to the question posed by her title. Finally I got a crack at it. Here are some reactions.

Walsh's book is a personal story, not an analytic exercise. It's the tale of how her Irish immigrant working class relatives drifted away from supporting racial and economic justice and away from liberal Democrats. Like too many older whites, they somehow ended up in the party of the plutocrats, of G.W. Bush, John McCain, and Mitt Romney. It is also the tale of how Walsh managed to remain a liberal Democrat despite feeling out of place among progressives. And so, necessarily, it is a story of feeling whiplashed, without a place.

Like such authors as Rick Perlstein, Jefferson Cowie, and even the too little noted Judith Stein, Walsh points to the late 60s and the 70s as a hinge time, the time when the white working class became alienated from Democrats.

Because Democrats were in charge when the country came undone in the 1960s, Democrats got blamed. …

… prosperity undermined the New Deal coalition, giving white workers the freedom to believe their enemy was black protesters and white hippies, while providing the New Left with the dream it could create a progressive majority coalition without big labor. The two groups suddenly had the luxury of hating each other, of focusing on their cultural differences, because their economic battles seemed to have been won.

She mourns the disdain and ignorance with which liberals treated the terrible history of Irish suffering -- somehow other people's travails counted more than those of her people. None of us respond well to feeling our culture has been dismissed.

And Walsh experienced a particular wrenching that many white progressives felt in the Reagan era:

… I had given up on my working-class family; I tuned out their problems and anything they had to say that was legitimate. I was out of touch with the number of people who shared their concerns and blissfully ignorant of what the new Reagan Republicans would impose on the national scene in the coming decades -- a full-scaled Republican revolution that used social issues to inflame the people I grew up with, while betraying their economic interests.

She identifies with the experience Obama recounts in his autobiography of checking out the squabbling sectarian left groups of that era while seeking a political home and, like him, recoiling at their lack of realism and of an inspiring vision.

I lived some of the same sense of losing my place (though my mostly WASP family had always been Republicans of the now-extinct northeastern sort), but for me, insurgent feminism filled the hole where New Deal populism might have once lived. Though Walsh is the epitome in some ways of what the women's movement has won us -- a Hillary-admirer, a writer, a TV commentator who brings a woman's experience to politics -- the women's movement doesn't seem to have served her as a political home in that difficult time. She reports with resentment her feeling of having no place in social struggles in which race seemed to trump concerns for economic justice.

In at least two different Oakland meetings, heavily attended by welfare-rights groups, the very same African American woman stood up, as if on cue, pointed to me sitting with the decision-makers, and said angrily, "There's only one reason you're sitting there, and I'm standing here." No one needed to spell out the reason: that I was white. I understood her anger, but it felt like theater, not practical politics intended to bring about change. (I also noticed that "minorities" always singled out other "minorities" at such times. Why didn't she suggest an older white male colleague had taken the place that should have been hers?)

I'm a little older than Walsh with a different political history, but I've been in some of those meetings -- in Oakland in fact. Come on Joan -- you shine that stuff on. It will either pass away or it won't; you'll either be accepted for your work by people whose work you respect or you won't; there's nothing to do but let it go and do the work. I'm sure she knows that, but the book is a testament to how hard it has been for her to hang on to what she knows.

Anyone who has read this far will have gathered that I'm ambivalent about What's the Matter with White People? It didn't help as much as I hoped in answering its own question. I can't stop with recognizing the humanity of people whose bitterness (yes -- bitterness and disappointment, I will just say it) keeps them acting politically against their own self-interest. I want to know what we can do -- truthfully, respectfully -- to help them change that. I'm an activist, I guess.

On the other hand, if you don't know much about the history of Irish assimilation in the U.S. melting pot, this is a good and valuable book. There are more histories in this country than we realize and we become more ourselves as we assimilate more of them.
Posted by janinsanfran at 10:30 AM

You should understand, when the Democrat Party abandoned the class values of the White working class, for neolib-feminist,minority racist, free-trade advocacy...it drove large numbers of white workers into the arms of the GOP plutocratic, anti-worker bankster-corporate gangsters.