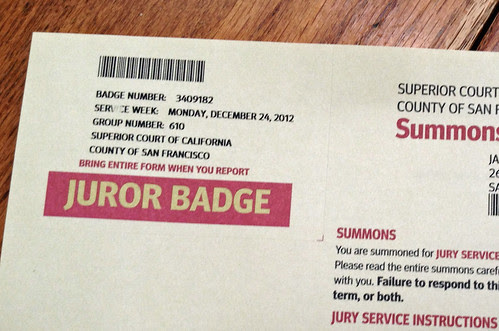 Would you believe, I've been summoned for jury duty the morning after Christmas? Neither do I believe it, but I am required to report.

Don't get me wrong -- I think juries are a generally good thing, sometimes even surprisingly wise. And I love the air of civic earnestness that most people bring to the jury pool. Sure, hardly anyone is happy to have their life disrupted. But once resigned to their fate, people take the task seriously.

But I know I'll never be on a jury. I've worked in so many venues and know so many people that there is always something to disqualify me. No responsible lawyer on any side would take a chance on me, for good or ill. My only function is to pump up the numbers. Reporting for duty feels futile.

Regular blogging will resume when they let me go.

UPDATE: Well that was quick ... I've been excused for "hardship." The trial was expected to continue into the week next month during which I've got tickets to Kauai. That's cause for dismissal of a potential juror.

About 90 of us were in the first batch brought into a courtroom for a criminal trial. The defendant was an older black man, well dressed. Among the panel of jury candidates, only two were obviously African-American. One of those was one of the 30 or so of us released for various hardships.
Posted by janinsanfran at 5:00 AM

I was shocked to be summoned a year and a half ago and hoped I wouldn't be chosen but I was. It is not something I wanted to do but as you said, I see it as something needful for our society and it taught me a few things about the process that it took experiencing to really grasp. I should not have to do it again since they said when you reach 70, it's an automatic excuse if you wish it so and I will wish it so. It's a 20 mile drive for me to get to the courthouse which didn't exempt me as I had thought it might...

I remember several attempts to get on juries years ago. Having been on the other side several times, I really wanted to experience being on a jury. Couldn’t get past the point of jury selection. I even sought the advice of a public defender. She said that my best bet to be seated was to not give many clues about myself, to not give either the prosecutor or defense attorney a reason to excuse me. (Example: do you have children? My answer should have been “no” as opposed to my long-winded response about not having children, but that I do have relationships with children that are very close, blah, blah, blah.) That they’d have to take a chance on me, an unknown. Didn’t have a chance to put that advice into practice. Next time, I couldn’t get past the group questions. “Raise your hands if you’ve ever been arrested.” Up goes my hand. “If you’ve ever been in jail or know people who have been in jail.” Up goes my hand. “If you know people in law enforcement.” Up goes my hand. For almost every question they asked, I was on one side of the fence or another. Both prosecutor and defense attorney did not want me on the jury. By the next time I was called, I was excused for medical reasons. It’s been years since I’ve received a summons.