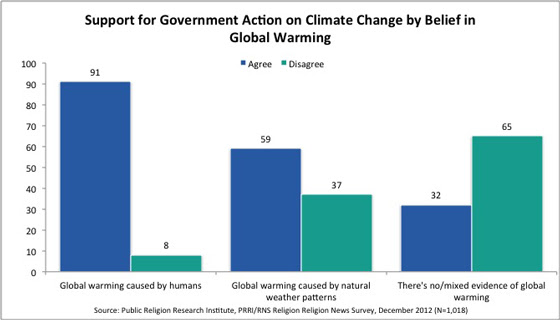 The Public Religion Research Institute has good news and bad news on U.S. citizens' understanding of global warming. As is so often the case in these surveys, mainline Protestants and religious congregations in the communities of color get no more than a glancing mention in these statistics. According to the Pew Forum 14 percent of us are mainline Protestants, 5 percent are Latino Catholics, and 16 percent are Black Protestants. The later two groups are increasing as a political force. All these religious segments of the population have been moving strongly toward the Democratic Party -- and, I imagine, toward the consensus Democratic stance of demanding climate action from government.