Warming Wednesdays: before we smash into the underlying reality, there are things we can do … 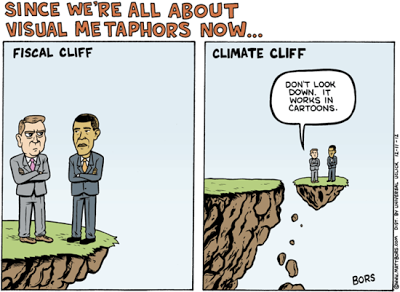 We can adopt better light bulbs. No, really. And we're not just talking about the awful squirrelly fluorescents many of us have dutifully inserted in place of incandescents in recent years. Since lighting uses something like 19 percent of the electricity we consume and far too much of that is generated by coal fired plants that are spewing carbon, wider adoption of more efficient bulbs is a good thing. And new bulbs using new materials are being invented. First there were new bulbs that use light emitting diodes (as are used for indicator lights). But now there are bulbs that create light by running a weak current through layers of plastics. The inventor explains:

"What we've found is a way of creating light rather than heat."

That's got to be more efficient.

The Natural Resources Defense Council has thought up some ways that President Obama can push for serious cuts in carbon emissions without needing to win a Congressional vote, according to an article by David Roberts at Grist. The Environmental Protection Agency has the legal authority (and duty) to force coal-fired generating plants to clean up their act under the Clean Air Act. But since reaching the lower standards is pretty much impossible for most old coal plants, the agency has not issued a standard because they haven't wanted to fight the ferocious opposition the electric industry would undoubtedly unleash. NRDC proposes the EPA should regulate emissions on a state by state "fleet" basis. That's how it works for automakers: they face an average fuel efficiency target that their entire line must meet. Electrical energy generation would get the same treatment. That is, some old plants might continue to exceed the standard, so long as newer natural gas and alternative energy sources kept their emission well below it and so kept the entirety of an electric utility's pollution at a lower level. Might work -- and the legal mandate for this sort of regulation is already in place.

Along with these initiatives, the New York Times reports that a promising campaign is underway to persuade colleges and universities to disinvest from large fossil fuel companies. Crazy? No way. Students may not be able to win these battles rapidly, but this is a good fight in a good arena that will yield a new generation of climate warriors. Students feel the urgency -- it's great to find them an avenue to make a difference. Who knows what might grow out of such campaign? Gotta start somewhere ...