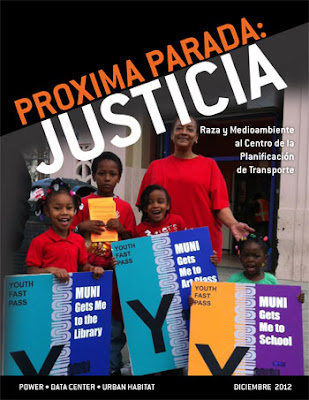 Last night I attended a public party to celebrate the release of the publication pictured. If, like me, you are linguistically challenged, that's NEXT STEP: JUSTICE -- Race and Environment at the Center of Transit Planning in the English edition. It seems a solid piece, spelling out how seemingly neutral policies can harm people dependent on public transportation who are overwhelmingly people of color. Necessary graphs and maps are supplemented by the testimony of members and supporters of the community organization POWER.

POWER has just led and won a community campaign for free transit passes for low income youth. San Francisco had started its 16 month pilot program -- POWER sees its next job as making this victory by and for young people a permanent practice. The new publication (not yet available on the web -- I wonder if they'll make it downloadable?) has a lot of little gems packed in.

Just to give you a taste, here's Howard Nelson from the Transit Workers (bus drivers) Union describing his job: 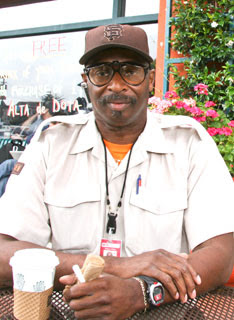 Being a Muni driver is a good skill to have because, just like people need food, people will always need public transportation. At one time driving the bus was one of the only jobs that any minority could get. Muni drivers today are still majority Black and Latino and increasingly also Asian. Before, no one ever wanted to be a driver. It is a hard job. In a new class of 25-30 operators, Muni is lucky if 5-6 them stay on as drivers. …

I would also like to see the MTA [the transit authority] invest in our buses. There are new models of buses that are much easier for elderly people and people with disabilities to enter, and I know I will get older myself one day. If the MTA can spend money on a light rail, the Transbay terminal and the America's Cup, they can afford to buy some new buses. When we look at the bigger question of raising more revenue for public transit, I think Obama is on the right track. No one needs to die a billionaire -- what good does that do you? People making over $250,000 a year can afford to pay more taxes to fund things like transit…

Gotta love this guy. Gotta support the transit justice project, whoever you are.

Posted by janinsanfran at 9:01 AM