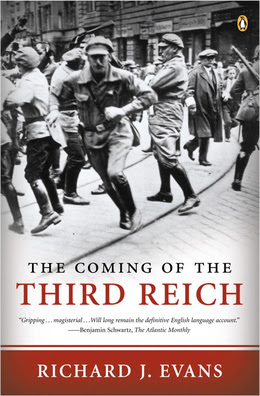 I needed a long reading project concurrent with the recent campaign, so I dove into Richard J. Evans' The Coming of the Third Reich. This volume is the first of three; I'll write about the other two as I (slowly) work my way through them.

Evans is a Brit, a professor of history at Cambridge. An interesting preface explains why he felt an exhaustive narrative history of the mid-20th century German rogue state was needed. He served as an expert witness in the 1996 libel trial in which historian David Irving sued historian Deborah Lipstadt and Penguin Books for writing that Irving was a Holocaust denier (the court concluded he was). Evans discovered in that work that a new general account might help. He also seems irritated that for English speakers the paradigmatic account of Hitler's Germany remains William L. Shirer's Rise and Fall of the Third Reich. He explains:

...the number of broad, general, large-scale histories of Nazi Germany that have been written for a general audience can be counted on the fingers of one hand.

The first of these, and by far the most successful, was William L. Shirer's The Rise and Fall of the Third Reich, published in 1960. Shirer's book has probably sold millions of copies in the four decades or more since its appearance. … There are good reasons for the book's success. Shirer was an American journalist who reported from Nazi Germany until the United States entered the war in December, 1941, and he had a journalist's eye for the telling detail and the illuminating incident. His book is full of human interest, with many arresting quotations from the actors in the drama, and it is written with all the flair and style of a seasoned reporter's dispatches from the front. Yet it was universally panned by professional historians. …

The emigre German scholar Klaus Epstein spoke for many when he pointed out that Shirer's book presented an 'unbelievably crude' account of German history, making it all seem to lead up inevitably to the Nazi seizure of power. It had 'glaring gaps' in its coverage. …even in 1960 it was 'in no way abreast of current scholarship dealing with the Nazi period'. …For all its virtues, therefore, Shirer's book cannot really deliver a history of Nazi Germany that meets the demands of the early twenty-first-century reader.

It does seem that Evans is distressed that Shirer managed to make his account so gripping that it has endured. He also finds Shirer morally judgmental and intentional chooses not to emulate him in this. I think I am an admirer for Shirer's history of the Third Reich precisely because of the visceral outrage he incorporates in his narrative.

But these quibbles certainly don't mean that I didn't get a lot out of Evans first volume. He describes its purpose:

Understanding how and why the Nazis came to power is as important today as it ever was, perhaps, as memory fades, even more so. We need to get into the minds of the Nazis themselves. We need to discover why their opponents failed to stop them. …The story of how Germany, a stable and modern country, in less than a single lifetime led Europe into moral, physical and cultural ruin and despair is a story that has sobering lessons for us all; lessons, again, which it is for the reader to take from this book, not for the writer to give.

What stands out for me from Evans' account of Hitler's rise is the centrality of violence -- assaults on opponents, rioting, intimidating mass marches -- employed by many factions in Weimar German politics. Defeat in World War I and the economic pain that followed left ripe ground for the growth of intolerance. He shows that as early as the 1920s, what had been a pervasive cultural anti-semitism was transformed in this unstable context into a foundation that would underlie the Nazi project of mass extermination.

It was not just an unprecedented willingness to translate vehement prejudice into violent action that broadly distinguished post-I9I8 antisemitism from its prewar counterpart. While the overwhelming majority of Germans still rejected the use of physical force against Jews during the Weimar Republic, the language of antisemitism became embedded in mainstream political discourse as never before. The 'stab-in-the-back', the 'November traitors', the 'Jewish Republic', the 'Jewish-Bolshevik conspiracy' to undermine Germany -- all these and many similar demagogic slogans could be regularly read in the papers, whether as expressions of editorial opinion or m reporting of political incidents, speeches and trials. They could be heard day after day in legislative assemblies, where the rhetoric of the Nationalists, the second largest party after the Social Democrats during the middle years of the Republic, was shot through with antisemitic phrases. …The sensibility of many Germans was so blunted by this tide of antisemitic rhetoric that they failed to recognize that there was anything exceptional about a new political movement that emerged after the end of the war …

The Great War had left behind a substantial cohort of damaged ex-combatants (and younger siblings who envied their "heroic" older "brothers") who knew no way to be in society except as warriors. A Columbia sociologist, Theodore Abels, persuaded the Nazi Party to back his collecting the personal stories of many original Nazi movement members, especially the para-military brownshirts who intimidated and fought other Germans with other political allegiances. Their motivations don't seem to have been very ideological.

Among ordinary Party activists in the I920s and early I930s, the most important aspect of Nazi ideology was its emphasis on social solidarity -- the concept of the organic racial community of all Germans -- followed at some distance by extreme nationalism and the cult of Hitler. Antisemitism, by contrast, was of significance only for a minority, and for a good proportion of these it was only incidental. … Men often came to the paramilitary wing of the Nazi Party after serving at the front in 1914-18, then becoming involved in far-right organizations such as the Thule Society or the Free Corps. …Violence was like a drug for such men …

"The terror of police and government against us', as one stormtrooper put it, was another source of resentment against the Republic. Such men were outraged that they should be arrested for beating up or killing people they considered to be Germany's enemies, and blamed the prison sentences they sometimes had to suffer on the 'Marxist judicial authorities' and the 'corruption' of the Weimar Republic.'

…It is difficult to grasp the full extent of the stormtroopers' fanaticism and hatred unless we accept that they often did feel they were making sacrifices for their cause. …The Nazi Party depended on such commitment; much of its power and dynamism came from the fact that it was not dependent on big business as the 'bourgeois' parties and the Social Democrats to varying degrees were, still less on the secret subsidies of a foreign power, along the lines of the Moscow-financed Communists.

In addition to their violent, fanatical base the Nazi leaders seem to have excelled at organizing party activities -- a quality that seldom goes with ideological lunacy and celebration of violence. The Party generated groups and projects in all sectors of German life. It was very good at running electoral campaigns, at spreading propaganda, and mobilizing voters.

All this mass organization meant that in 1933, when the politicians of the Weimar Republic -- a collapsing state structure that had long since ceded any allegiance to democracy and the rule of law -- gave over power to Hitler as Chancellor, the Nazi Party was organized to take over the functions of a government that had lost its legitimacy. Nazi organizations quickly took over the police, "cleansed" the government bureaucracy and educational institutions of Jews and political opponents, and generally dominated public life in all its aspects. Evans makes it clear that they could accomplish this as quickly and completely as they did because they combined an enthusiastic use of violence with efficient mass organization. It required both to install the Third Reich, the Nazi dictatorship.

As a student of history and politics, I still am amazed that this incendiary combination of forces could emerge in a large, rich, modern state. Evans is right: this is a sobering narrative.
Posted by janinsanfran at 5:00 AM