The great American consumption binge that is Christmas in is full flower on Mission Street in San Francisco. This segment of the street is the city's equivalent of Delancey Street in New York, a jumble of discount bazaars offering cheap Chinese imprts. 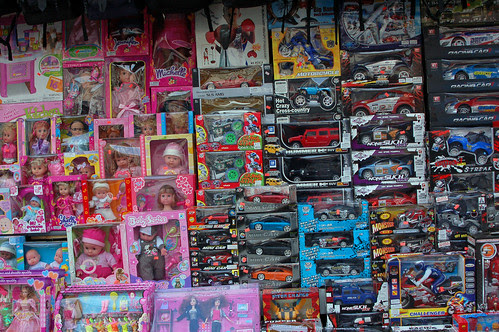 I thought of this display when I read this:

IMAGINE walking into the toy department and noticing several distinct aisles. In one, you find toys packaged in dark brown and black, which include the “Inner-City Street Corner” building set and a “Little Rapper” dress-up kit. In the next aisle, the toys are all in shades of brown and include farm-worker-themed play sets and a “Hotel Housekeeper” dress.

If toys were marketed solely according to racial and ethnic stereotypes, customers would be outraged, and rightfully so. Yet every day, people encounter toy departments that are rigidly segregated — not by race, but by gender. There are pink aisles, where toys revolve around beauty and domesticity, and blue aisles filled with toys related to building, action and aggression. ...

The whole is worth reading. Apparently gender-based toy marketing has made a big comeback.

This trend makes me ache for the child who doesn't fit the gender stereotypes. By enforcing this division, we say to many children that they are no good at being part of their own society.

I know. I was a cap-gun waving, sword-fighting, riotous bundle of little girl energy as a child in the 1950s. Curiously it may have been easier to violate gender norms then: those of us who were misfits were just "experimenting"; the adults trusted we'd grow out of it. Nowadays, girls actually can grow up to attend West Point and end up in combat. The society approves. But we still demand they conform to gender stereotypes and even reinforce those with "science."

Is it possible that some contemporary children comfortably outfox the social rules, learn early to play gender as a game of possibilities rather than restrictions, sail through childhood's obstacle course, and emerge comfortably themselves. I've seen a few of these who seem to have little trouble navigating the gender minefield. But I weep at this season for the ones whose way of appearing in the world seems to violate their inner being. This is a tough way to come up.
Posted by janinsanfran at 7:37 AM