On encouraging low frequency voters to get the habit 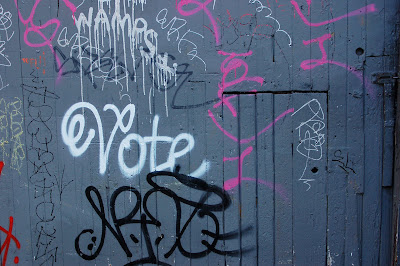 This admonition from Ed Kilgore to progressives crowing over the November election results has been bumping around in the back of my head since I encountered it:

… the one [concern that] should most trouble Democrats: the growing disparity between the partisan leanings of the presidential and midterm electorates, attributable to the unusually high correlation of party preferences to age and ethnic divisions. Just as odds of Republican gains in 2010 went up the moment after Barack Obama’s election, so too have the odds of GOP gains in 2014, regardless of what happens in Washington between now and then. So it’s no wonder Republicans want to get there fast.

Yup. Our folks -- the young, new citizens, low income people of color -- just don't turn out in the same numbers in midterms as they do in presidential elections.

So what does it take to get more of them voting more regularly? Obviously more participation from these citizens would change the kind of society we make. And obviously, we do need to "fix" (as as the Prez said on E night) a voting system that makes it difficult to participate whether through registration hoops and/or other obstacles like long voting lines and short hours. But also, we need to think in terms of helping folks acquire the habit of voting.

The people who are more likely turn out every time -- older, whiter, and more affluent folks -- are people who think of themselves as rightful, responsible participating citizens. Part of their self-definition is that they are voters; voting is what good citizens like them do, pretty much every election. How do we encourage that affirming self-understanding among currently less engaged people? Those of us who work in campaigns have long assumed that voting is "habit forming." But how do we help people get the habit?

In Mobilizing Inclusion: Transforming the Electorate through Get-Out-the-Vote Campaigns, Lisa García Bedolla and Melissa R. Michelson report on their research on just that question. They studied the efforts of community groups that were turning out new voters over multiple cycles, looking at what sort of activities raised participation and helped create the voting habit. And they concluded that it is possible to draw these folks into regular participation. But this can be hard to see if our focus is mainly on turn out in presidential contests. It was the contacts in previous, low turnout, often local and insignificant, elections that raised turn out in presidential years.

... habit casts a different light on the usual way of evaluating the costs and benefits of a GOTV campaign. The typical approach is to think only in terms of votes produced in the current election. A more realistic calculation would take into account the future effects of this year's voter mobilization drive. If a campaign generates 1,000 additional votes at a cost of $40,000, the price amounts to $40 per vote for the current election. But if we also include the 310 votes in the next election, the price falls to slightly over $30 per vote ($40,000/1,310).

… What these habit formation calculations tell us is that increasing turnout in communities whose members have a low propensity to vote not only is possible but has enduring effects. Those living in low-income communities of color will vote, assumptions notwithstanding, and they may even vote at high rates. When made to feel included in a way that moves them to adopt a voter schema, they will vote, particularly in high-salience elections when the perceived importance of doing so is obvious.

The enduring effects of voting once make it clear that a socioculturally based cognitive shift happens during the initial mobilization, one that is reinforced by voting to produce a remarkably enduring long-term effect. By acting as voters, those previously moved to the polls become voters.

These findings have real world implications. Oh hell, do I have to stick my toe in to party politics to encourage this? That may be more than this jaded activist can stomach, but I am sure grateful to the people who labor in those trenches. Spreading the voting habit, along with structural voting improvements, must be a significant piece of any strategy to get the country onto a more sustainable and equitable track.

The picture above comes from a pretty scuzzy San Francisco Mission District alley. Some one is on this voting thing ...
Posted by janinsanfran at 10:41 AM

The "it is your duty to vote" approach doesn't seem to work so well, so why not try to wrest control from the older by urging the youngsters to mess up the older people's plans?

The researchers find that "social pressure" -- letting folks know that whether they voted or not (if registered) is public information increases turnout.

But mostly we need to help voters feel good about themselves for having voted. People want to the think of themselves as "good citizens." We all need to ensure people feel as if they are getting a pat on the back for "doing the right thing" when they DO vote. "I voted" stickers help with that that.