After the election comes the analysis. The sample of citizen opinion expressed, however murkily, on election day is larger than any poll. But pollsters try to fathom and shape our understanding what those 120 million voters meant by it all.

So the polls keep on coming and people who have something to say try to knock the results into the thick skulls of our politicians. This seems about right to me. 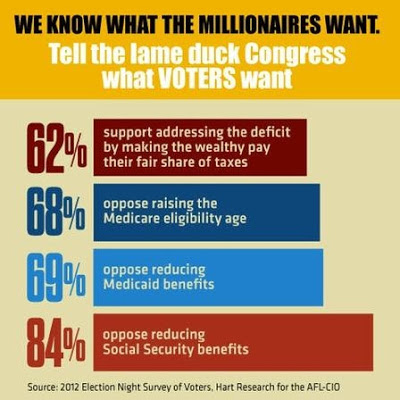 ***
One of the more thorough and interesting post-election surveys has been described by Ronald Brownstein in the National Journal. Brownstein devotes most of his attention to the huge disparities along partisan and racial fault lines in attitudes toward government and policy found by the survey. Guess what? Expressed in multiple ways, the emerging majority that re-elected Obama believes government exists to promote the general welfare, not to protect the rich.

The whole is worth reading, though not surprising.

But hidden away in Brownstein's description of the findings is this remarkable paragraph:

On the impact of health care reform, Americans sort almost exactly into three camps, with about one-third each saying Obama’s plan will improve the system by increasing access and lowering costs, hurt the system by disrupting it, or not do enough to change it.

Get that? Three camps, not the two -- young and brown v. the old and white -- that this commentator sees facing off on almost all other topics.

It's still true: the unspoken secret underlying Obamacare's failure, so far, to win majority support is that about one third of us simply suspect that it will not to go far enough to ensure access and care for all of us. With the insurance profiteers in the mix, we remain unconvinced -- and largely unheard.

Maybe the implementation of Obamacare all work out, but with Republicans throwing up every road block they can find, the administration has a hard job ahead.
Posted by janinsanfran at 6:07 AM