Books in the past year 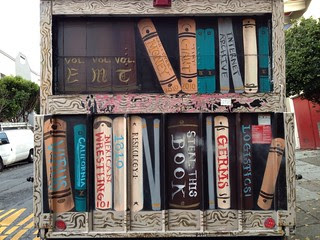 That's not a book case. Note the reflectors at the bottom right and left. That's the painted rear of a truck parked on 24th Street in San Francisco yesterday. 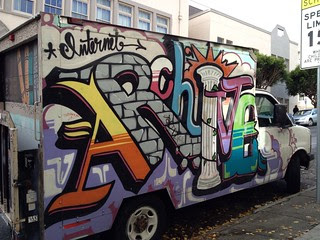 The side panel proclaimed the vehicle an Archive … I do not claim to understand.
***
Nearly everyone I know has shifted over the last few years from reading books in their weighty, musty paper versions to using one of the various available electronic tablets. Josh Marshall who edits TPM describes how the transition happened for him.

I never had this desire to stop reading physical books. I was always into the physicality of books. This I just stumbled into. When I first got an iPhone I tried out the Kindle app for iPhone and discovered that even on that tiny non-ideal screen, it worked for me. Then I bought an actual Kindle, which pretty much worked. And then when the iPad came out, I downloaded that Kindle app and I was done with physical books. I haven’t bought one in at least a couple years now and I’m not sure I ever will again unless I find something I really, really need to read that isn’t out in a digital edition (and yes, it does constrict the numbers of books I can read.)

So far, I haven't been willing to move to a tablet. Why? It's not that I enjoy lugging heavy objects around -- nor giving up whole walls of our small living space to bookcases.

The stumbling block is that I'm not yet convinced that I'm willing to lose the miracle that is the public library. We live within a half a block of a branch. I can order any book in their collection; it will be delivered around the corner and I can keep it at least 3 weeks -- all for FREE. (Yes, I know my city taxes pay librarians and library bonds; that's a good thing!) The collection is wide ranging, though maybe a couple of months behind publication dates. But nearly everything anyone ever wrote can wait. And not everything I want to read has been published in the last ten years and hence electronically available, not by a long shot.

Yes, the library does have some kind of system for making e-book loans. I've looked at it and I don't quite get how it works. Maybe that's my future; at the moment it seems to be at an awkward stage: workable but anti-intuitive.

So for now I won't join the tablet readers, however much I envy them those light-weight, sleek appliances. Maybe soon, but not quite yet. I'll stick with the library -- and what book purchases I make will be audiobooks, volumes I can *read* while walking or exercising. After all, I can always get the print versions from the library …
*** 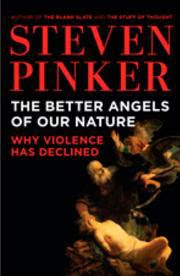 Most years I record here which of the many volumes I've read stuck with me, made me think. This year there's no contest: I know which new book haunted my life and imagination throughout the year, but, oddly, I never directly wrote about it here, though I alluded to it often enough. Steven Pinker's The Better Angels of Our Nature: Why Violence Has Declined is one of those rare "big books" that tries, hubristically, to explain all human history -- and at least makes a case for itself. Pinker thinks the species has become less violent, less destructive , kinder, even gentler, over time and sets out to prove his thesis. Professional historians hate this sort of thing because the effort always falls victim to anachronistic thinking that erases the particularity of past eras; scientists shout "confirmation bias" (seeing what you expect and want in the evidence) on contact. And it doesn't help that Pinker himself comes across in the book as an intellectually arrogant twit who has always enjoyed being the smartest guy in the room.

But he's on to something and I recommend it to anyone up for a romp through human history in 800 mind-expanding pages. The sheer length commends this book for tablet reading ...
Posted by janinsanfran at 7:16 AM

Email ThisBlogThis!Share to TwitterShare to FacebookShare to Pinterest
Labels: booktalk

The truck is presumably related to the Internet Archive.

I've finally figured out the SFPL's e-book lending thing, and it's every bit as clunky and awkward as it seems. Perhaps worse, though, the selection is terrible.

My husband bought me a Kindle last Christmas, partly because he was probably tired of hearing me complain about the paucity of selections in our small-town library. At first I was delighted. I could download books for free and have a built-in dictionary to look up definitions of words I didn't know. The dictionary was especially needed because the free books are the "classics" of the 19th century, Dickens, Brontes, Trollope, etc., and there were many words used in those days that we no longer use frequently.

However, all e-books have their limitations. Kindle, for example, doesn't use page numbers and the automatic place-finder doesn't always work and you are lost trying to find the last screen read. With a real book you can quickly flip the pages to find your place, but on an e-book it's a tedious process. Also, if there are footnotes and they are listed at the back of the book, you can't flip back to see them. If there are maps or illustrations you wish to refer to while you're reading, forget it, it's just too difficult to go back and forth. And the dictionary furnished is not one of the most detailed, so many words just aren't listed, although they could have purchased the rights to a better dictionary to embed.

The heft of the tablet is totally different than a real book and there are problems sometimes with reflected light. My husband fashioned a holder from a metal bookend to make it easier for me to read at a table, but trying to read in bed makes my hands crimp up, but maybe that's just old age! All in all I prefer real books, but e-books have their pluses -- I just hope that publishers continue to print "real" books so that libraries do not become obsolete.