Older parents: really such a novelty?

In December issue of The New Republic, Judith Shulevitz explores "How Older Parenthood Will Upend American Society: The scary consequences of the grayest generation." Here's her jumping off point:

…we have our children much later than we used to…

Well, yes. Many of us are accustomed to the possibility of older parenting. I just had a conversation a few days ago with a friend who is 60 who is trying to adopt a 4 year old. (He knows what he is getting into; this would be a second round for him.)

Schulevitz, TNR's science editor, catalogues our emerging understanding of chromosomal and other genetic anomalies that apparently increase as the age of procreation rises. Scientists attribute to couples procreating over 35 much of an increased frequency in the incidence of a spectrum of disorders ranging from full blown autism through more subtle "delays" among contemporary children. Older childbearing exposes offspring to whatever accumulated environmental stresses the parents have survived and it is not as if our eggs and sperm live a safe, pristine setting. There's even a finding that men over 55 are "three times more likely to father a schizophrenic child."

She also knows the news about older parenting isn't all bad.

Study after study has shown that the children of older parents grow up in wealthier households, lead more stable lives, and do better in school. After all, their parents are grown-ups.

But she worries about how older parenting disrupts the social life-cycle:

A mother who is 35 when her child is born is more likely than not to have died by the time that child is 46. The [mother] who is 45 may have bowed out of her child’s life when he’s 37. The odds are slightly worse for fathers: The 35-year-old new father can hope to live to see his child turn 42. The 45-year-old one has until the child is 33.

And all this goes with a lower birthrate worldwide which she concedes may not be all bad.

Fewer people, of course, means less demand for food, land, energy, and all the Earth’s other limited resources. But the environmental benefits have to be balanced against the social costs.

She knows why birthrates go way down in all modern societies: when women can control our fertility and achieve creative satisfaction outside of raising the next generation, they (we) will do so -- in significant numbers. But she thinks the "social costs" are too high. I don't see it. I bet the species can figure out how to adapt to less population growth and different life-cycles.

Feminists have a lot to say about Schulevitz' themes. I ran across her piece through commentary at Feministe. I'm among those who question Schulevitz' handwringing .

But I want come at this here from a more personal angle: I'm the product of a long family line of people who had children when they were older. I can't say the family was completely well balanced, but I don't think my forebears were that much wackier than anyone else's either. Some data points: 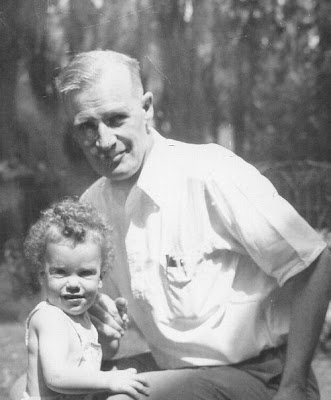 I don't know quite what all this means, except that I'm inclined to take Schulevitz with considerable grains of salt. Her article is an artifact of a very particular time, place and social situation, as is my life history. Human beings -- genes and societies -- find diverse ways of organizing how we perpetuate the species. Sure, there are (or were before some modern technologies) physiological constraints on how we can organize families, but possibilities are broader than any snap shot of "reality" is going to suggest.
Posted by janinsanfran at 9:45 AM