A preview of the next wave of COVID-19 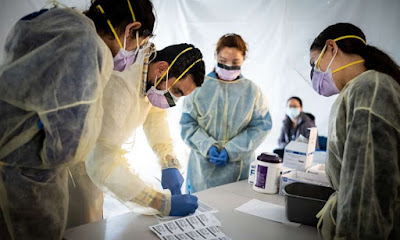 When the original Obamacare website failed abysmally on its launch in 2013, Andy Slavitt was the tech health entrepreneur brought in to turn things around. Subsequently he served in the Obama administration as Acting Administrator of the Centers for Medicare and Medicaid Services (CMS). He's a guy who fixes things.

Many more functional federal and state public health officials have been consulting Slavitt as we have blundered through the current emergency.

Yesterday Slavitt offered a grim prognosis for the pandemic's course among us in a twitter thread I'm excerpting here.

I talked to today [with a health leader in a state] that has one of the biggest growth in cases in the country. There are some big differences with states that were hit hard with the virus in March or April. ... when we see high case growth in Southern states and Western states, it is not the same as when we saw it happen in NY. ...

The [unnamed] Health Secretary told me that some county health officials are being prohibited by local leaders from increasing testing so as not to perpetuate the “hoax” against president Trump. For the last few weeks, cases in this state have gone up. But at first it was waved off. Testing was higher. Cases were inevitable. But more recently, perhaps reflecting the opening of that state, hospitalizations started to increase. This was of course after the state had been closed down for a number of weeks in April with the rest of the country to prevent the virus from taking hold there. Saving lives but trying the patience of many in the state.

And here we come to crux of what he fears will be the situation in many places in the fall of this year:

If things get worse, the reservoir of will in this state to do anything resembling another shut down is gone. Many people have been told they sacrificed for nothing. The state officials know they just dodged a bullet but that the virus would eventually come. But now their political capital is spent.

The good news is they are more prepared than early states were. Older people who can are presumably being more cautious. Hospitals have PPE and plenty of beds & infection controls in place. The death rates should be lower. ...

But the political capital is already spent. Closing businesses isn’t an option even if things get worse. And the more politically conservative the part of the state impacted, the fewer the options. ... They believe that even a high death toll wouldn’t be enough to take action since the Coronavirus has become such a political hot potato. ...

States that were spared early are nervous & are left with fewer options to respond given the state of the politics. The virus is enough to battle. ...

Slavitt adds that he can't report who he was talking with or where because "I’m trying to help them right now & that won’t help."
...
Two points to never let go of as the disease cuts its swath through us:
Posted by janinsanfran at 5:28 PM